Kasim Nuhu Pledges To Give Everything To Fortuna Dusseldorf 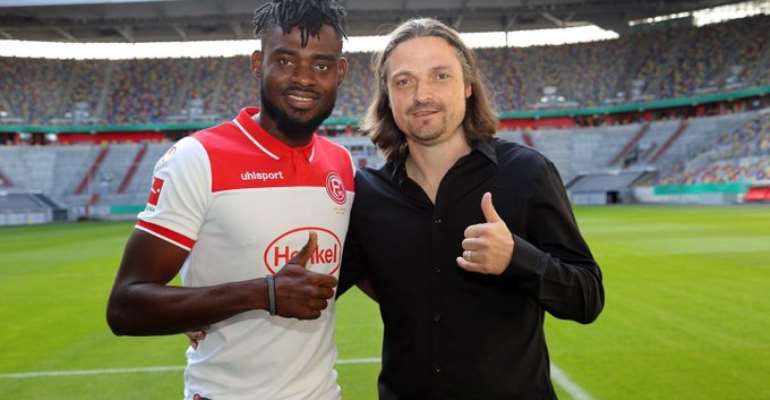 The Black Stars centre-back joins the newly promoted Bundesliga side on a season-long loan deal and has promised to deliver for the club.

The 24-year-old central defender who has been handed the number 4 shirt, becomes the fourth Ghanaian player to join the club after Bernard Tekpetey, Nana Opoku Ampomah and youngster Kelvin Ofori.

Kasim Adams moved from Swiss first division Young Boys to TSG Hoffenheim last season and has shockingly been farm out to Dusseldorf ahead of the start of the new season.

Fortuna Dusseldorf on Thursday.
Welcome to Dusseldorf, Kasim! How do you feel after signing with Fortuna?

Thanks a lot! I am very happy to be here and ready to give everything in training and play.

What are your goals for this year?
It will be important from the beginning that we win games and score points to get closer to our goal of relegation bit by bit. We should concentrate fully on this in every game.

What do you think about your new coach Friedhelm Funkel?

I talked to him before I moved and he made me feel good. That was very important to me before I signed. I think he will be able to support me a lot. I’m glad to work with him now.

Do you know Lutz Pfannenstiel from common Hoffenheim times?

Yes, sure! He was part of the squad planning team that brought me from Bern to Hoffenheim. He’s a good guy – and of course, he played a role when it came to getting me to Dusseldorf.

Finally, what were your thoughts when you just looked through the stadium?

It’s great, everything is perfect. Everything makes a good first impression on me. Now it’s time to work hard – and then it’s time to get started!

‘50% + 1’ To Pick President Is Constitutional Misrepresentat...
14 minutes ago