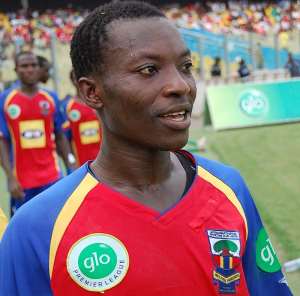 Ghanaian international, Kofi Abanga has revealed the main reason behind his decision to sign for Accra Hearts of Oak back in 2009 despite coming close to joining arch-rivals Kumasi Asante Kotoko.

In a recent interview with Angel FM’s Don Summer One, the entertaining midfielder has revealed that former Kotoko coach Bashir Hayford contributed to his decision to snub the club though he was introduced as a player of the team to some of the players.

Abanga, now 31, explains that the gaffer looked down on him after he was introduced as a new play by doubting his abilities which had given him hype all over the country.

According to him, the gaffer’s attitude towards him forced him to have a change of hearts and convinced him not to join the Porcupine Warriors. He ended up playing for the Rainbow boys despite living up to the hype that surrounded his move.

“I was with Edmund and Stephen Oduro but when I arrived at Kotoko, the coach who made me feel unwanted was Bashiru Hayford”.

“He is the reason I did not sign for Asante Kotoko. I wasn't happy at all, when he first met me, the way he approached me it was obvious he didn't want me at the club”.

“Chairman came with me at the training grounds to introduce me to Bashiru Hayford, and at the point, the words that came out of the coach's mouth were, ‘I know Abanga, this boy is the one you guys are treating like Maradona.' And I heard it”.

“He was the assistant coach of Sellas Tetteh when we were at the Ghana U-17 team, so he knew and when I heard he was at Kotoko I was happy but his comments and the way he treated me gave me a change of mind”, Kofi Abanga shared in the interview.

Watch the interview in the video below.