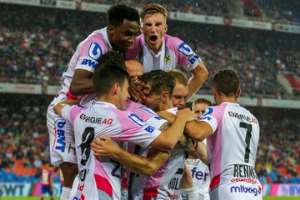 Ghanaian international, Samuel Tetteh featured for his Austrian side, LASK Linz to help them post an important 2-1 win over Swiss giants FC Basel in the first leg of the UEFA Champions League qualifying round.

The forward has been in fine form for his side in the last couple of weeks and continued to show his quality once again as they picked up the vital away win in Switzerland.

Not only did Tetteh impress, but he also created the assist for his side's second goal on the match day at the St. Jakob Park in Switzerland on Wednesday evening.

A pulsating encounter in the first half failed to produce any goals in the first half and ended up inspiring the two sides to score three between themselves to give both home and traveling fans something to cheer about.

Playing as the away side, LASK Linz took the lead just five minutes into the second half after defender Gernot Trauner turned in a Peter Michorl pass. Jaoa Klauss De Mello gave the Austria based club a two-goal cushion on the 82nd minute with an assist from Samuel Tetteh.

FC Basel did not give up and fought back to get a consolation goal courtesy a striker from Luca Zuffi with just five minutes to end proceedings.

LASK Linz will host Basel at the Linzer Stadion next week for the return leg of the UCL qualifying round as both sides continue their quest to qualify for the 2019/2020 edition of the prestigious competition.