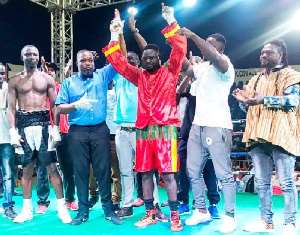 Undefeated middleweight boxer, Issah Samir, maintained his unbeaten record as a professional boxer with a sixth-round knockout over John Akurugu to win the Commonwealth title eliminator at the Bukom Boxing Arena on Sunday, August 4, 2019.

Samir, brother of Bastie Samir improved his record to 19 wins without defeat, while Akulugu suffered his sixth career loss in 21 fights.

Fans at the arena were treated to some exciting bouts to climax the Fist of Fury Boxing League and Professional Fight Championship staged by Landmark Promotions.

After the fight, Isaah Samir described it as “incredible” as he had invested so much into preparation with his focus on winning the Commonwealth belt.

“I put in a lot of preparation and work for this bout and to win it in the sixth round is incredible. Now the focus is to win the title itself so preparations continue right from here,” Samir said after the bout.

National and West African super middleweight champion Delali Meledzi defeated Iddrisa Amadu in a 12-round contest with the judges scoring it 119-108, 116-112, 120-109.

Rising Featherweight boxer, Holy Dorgbetor scored a second-round technical knockout win over John Owusu after the latter failed to answer to the bell for the second round.

In an International featherweight contest, Ghana’s Edward Kambasi lost to Raoul Adjaho from Benin by a majority decision.

Polished Michael Ansah aka ‘One Bullet’ destroyed his Togolese opponent Fatiou Sarouna in round one to win their international lightweight contest.

The winners and runners ups were rewarded with medals by the president of the GOC, Ben Nunoo Mensah and officials of the GBA and GBF.

The Bukom Fist of Fury Boxing League which is sponsored by GNPC, Goil, ADB and MJ Grand Hotel will take a short break and return after the African Games.

Organisers are planning to hold an awards ceremony to honour boxers, officials and media who have supported the programme.