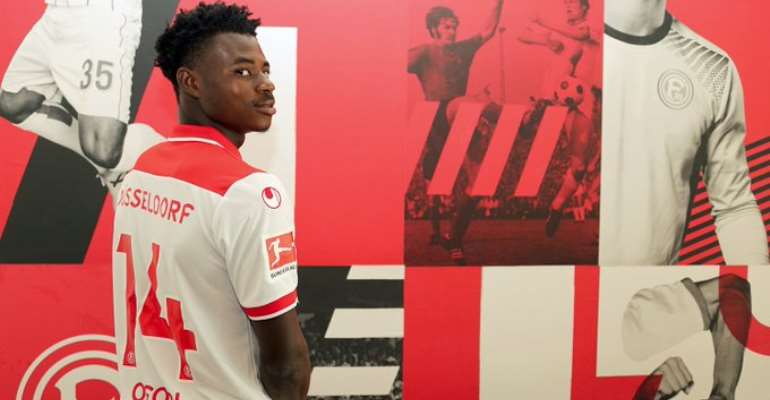 Kelvin Ofori says he is hoping to improve as a player after completing his move to Fortuna Dusseldorf.

The 18-year-old signed his first professional contract by signing a three-year deal with the Bundesliga side from Ghanaian side Right to Dream Academy.

After completing his move, the 18-year-old is hoping to learn and develop himself as he begins an adventure to reach his dream of becoming one of the best.

“I am very pleased to have signed my first professional contract with such a traditional club as Fortuna Dusseldorf,” he told the Club’s website after signing his contract.

“The Bundesliga is one of the best leagues in the world. I want to learn a lot here as a young player and develop myself step by step.

“The team and the whole club have helped me a lot in the first few weeks and I cannot wait to play in front of the great fans.”

His arrival tallies Ghana’s contingent at the Club to three after Bernard Tekpetey and Nana Ampomah joined the Club from Schlake O4 and Waaland-Bereven respectively.

JHS Not Increased To Four Years Or Reduced SHS Duration – Na...
25 minutes ago

We've Been Begging To Survive Over Closure Of Our Shops – N...
25 minutes ago