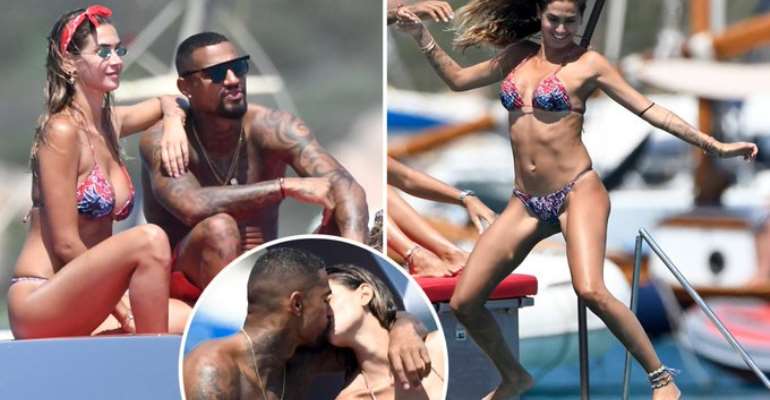 Kevin-Prince Boateng has been spotted kissing and cuddling TV presenter wife Melissa Satta on a luxury yacht break as they put split rumours behind them.

Boateng, 32, and the 33-year-old model looked utterly content as they relaxed in swim gear off the coast of Sardinia – the Mediterranean island where they married three years ago.

Satta, 33, who posed for Sports Illustrated, had hit back strongly after claims in January the couple were filing for divorce.

She said: “As long as I have the faith on the finger means that I am still a married woman.”

And on Monday they looked like newly-weds as they enjoyed a blissful excursion with their five-year-old son Maddox.

The Fiorentina new addition wore only red beach trunks as he showed off a heavily-tattooed body.

And Satta, in a print bikini, placed her arm tenderly across the ex-Portsmouth centre-back’s shoulder as they gazed out, smiling at the magnificent views.

For Boateng, it was a brief relaxing period before his new challenge at Fiorentina.

They finished a disappointing 16th in Serie A last season – five places below his previous club, Sassuolo.

But his fierce forthcoming test looked the last thing on Boateng’s mind as the pair lapped up the sun.

Sardinia means more to them that just being their wedding venue.

Massachusetts-born Satta, who holds USA and Italian passports, married Boateng at the Stella Maris parish church in Porto Cervo in 2016.

And that seaside resort is also where both she and Maddox were christened.