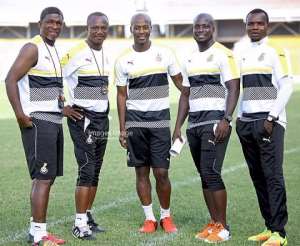 The pair were named to assist Kwesi Appiah when he was reappointed as the head coach of the Black Stars.

This decision by the country's football governing body became a major topical issue but the Aduana Stars Chief Executive Officer says the Executive Committee did that in order to take over from Kwesi Appiah when he decides to quits his position.

“We were tired of appointing foreign coaches so I remember that we all agreed to appoint two deputies who can take over from Kwesi Appiah that is why we appointed IbrahimTanko and Maxwell Konadu," he disclosed this on Agodie on UTV.

However, ahead of the 2019 Africa Cup of Nations in Egypt, the former Wa All Stars and Asante Kotoko trainer was sacked as the assistant coach of the team.

Maxwell Konadu is currently clubless and has been linked to several clubs in the Ghana Premier League.