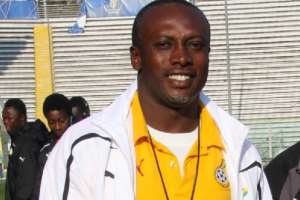 Head coach of the Black Satellites, Yaw Preko, has reiterated that he is optimistic of guiding the national Under-20 side to succeed in this year's Africa Games slated for Morocco on August 19.

The former world champions have not had the best of preparations toward this tournament.

However, the former Hearts of Oak assistant trainer beleives even if they did not return with the trophy they would be worthy ambassadors of the country.

According to the 44-year-old, the expectations of Ghanaians for the under-20 side have always been high and although that was a development stage, he would lead his charges to showcase true Ghanaian football.

“We want to go to the tournament and make Ghana proud. It’s about development, it’s not about going there to win at all cost but we want to go there and win and make the nation proud and for Ghanaians to see that there is future for Ghana football”, he told Graphic Sports

The former Fenerbahce attacker also said the absence of local competition hampered his selection process as it had left most of his talents rusty but added that he was working to put them in top shape as well as prune down from the current 25 to 18 for the competition.

“As I told you, there is no league in the country so the boys have been home for two months or more so definitely you need to take them through endurance and it has to be step by step but we didn’t have time,” the coach said.

Coach Preko, who also worked as the assistant coach of the under-17 national team, admitted their preparation time was inadequate, stating that “the little time wasn’t enough to put pressure on the players but when the tournament starts Ghanaians will see what we are made of,” he said.

The Satellites, who were drafted to replace the Black Meteors for this competition due to in their engagement in the Africa Under-23 championship, have been drawn in the same group with reigning African Under-20 Cup of Nations Champions Mali, as well as Senegal and Burundi.

The Satellites take on Burundi in the opening group match at the Stade Municipal in Kenitra on August 17 before playing their second game against Senegal four days later.

Ghana will wrap up their group stage campaign with a game against Mali on August 24 and the ex-Accra Hearts of Oak player is certain to play one of the best games in the tournament to ensure that Ghana’s name is put in the continental competition’s history books.

Coach Preko said they were expected to fly out of their current camp at the M-Plaza hotel in Accra on August 13 and “I expect Ghanaians to give 100 per cent support behind the team” to enable them to do well.