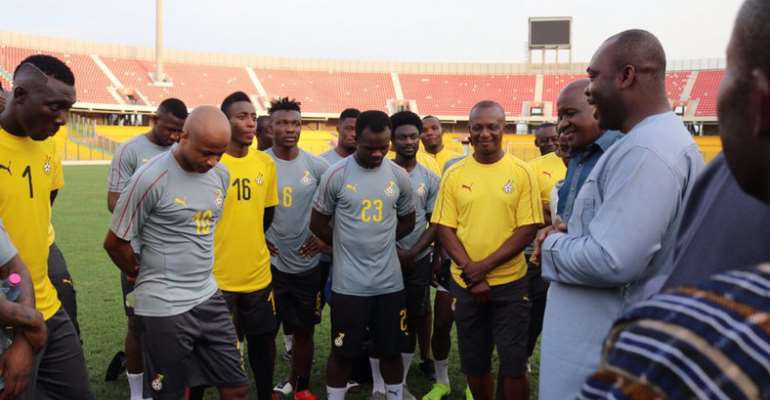 Modernghana.com can exclusively reveal that players will sign bond of good behaviour before they earn a call up to Black Stars.

For the past years, indiscipline at the camp of the Black Stars has been a hindrance to the performance of the team during major tournaments.

This comes after reports emerged that some players had sexual affairs with their girlfriends during the 2019 Africa Cup of Nations in Egypt.

It will be recalled that Kevin Prince Boateng and Sulley Muntari were sacked from the camp of the team during the 2014 FIFA World Cup in Brazil.

The duo after the 2014 Mundial have not received a call up to the Black Stars.

The indiscipline attitude of these two players is believed to have contributed to the country’s early exit from the tournament after excelling in 2006 and 2010 respectively.

However, Independent Newspaper can exclusively reveal that Black Stars coach, Kwesi Appiah has recommended that players must sign bond of good behaviour before they get called up to the Black Stars.

The former Al Khartoum manager made this recommendation when he submitted his 2019 Africa Cup of Nations reports to the Normalization Committee.

There have been calls made for the sack of Kwesi Appiah after failing to win the just-ended tournament in Egypt.

Ghana was crashed out of the tournament at the round of 16 by Tunisia losing 4:5 on penalties to extend the country’s trophyless jinx to 39 years but the 59-year-old is determined to stay and to do the right before his contract runs out in December.

However, Modernghana.com can confirm Kwesi Appiah has the full backing of President Nana Addo Dankwah Akufo Addo despite failing to win the 32nd edition of Africa’s tournament in Egypt.

It is yet to be known whether Kwesi Appiah’s contract will be extended when it runs out in December.