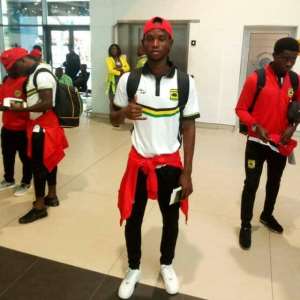 The 25-year-old who was key for the side during the early stages of the team’s campaign in the last edition of the CAF Confederations Cup has been sidelined with injury for the past 6 months.

He picked up the injury in the group stage of the competition when the Porcupine Warriors hosted and defeated Zambian giant, Zesco United 2-1 at the Baba Yara Sports Stadium.

Management of the club made arrangement for him to fly to Germany where he has successfully been operated on by top Orthopaedic surgeon, Dr. Thomas Westphal.

Though he is expected to fully recover in September, he has shown significant improvement after strictly adhering to a rehabilitation program designed by Germany’s leading physiotherapists, Andrew Berthold.

He arrived in the country alongside team nurse Emmanuel Osei Owusu and is expected to be further assessed by Kotoko’s team doctors.

His situation rules him out of the Reds CAF Champions League preliminary round fixture against Nigeria side Kano Pillars.

The first leg of that tie comes off on Saturday, August 10, 2019, at the Sani bacha Stadium.