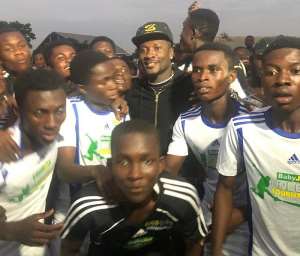 Anokye Stars FC has been crowned champions to qualify from Ashanti Region for the finals of the 2019 Baby Jet U-16 tournament after beating Ebony FC 7-6 in the Regional final.

The annual Baby Jet U-16 tournament is being organized by Goldstars Consult Ltd and is heavily supported by Asamoah Gyan Foundation and baby Jet promotions.

At the end of the Regional competitions, all qualified teams will converge in Accra to battle for the ultimate prize.

In the finals of the Ashanti Regional tournament yesterday, Suame-based Anokye Stars locked horns with Ebony FC but ended up playing a goalless draw match at the end of the 90 minutes.

Anokye FC’s Padmore Osei converted the last kick of the day to send fans at the Wesley College Park into a jubilant mood.

The side has now secured a place in the finals of the tournament which will be played in Accra on August 3, 2019, at the Legon stadium.

Watch a short highlight of how Anokye FC celebrated the win in the video below.