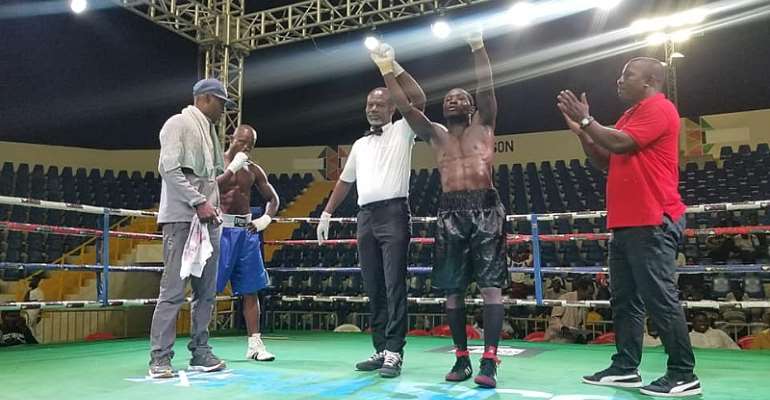 The bouts on this card were action-packed and were certainly entertaining. For their hard work and dedication in making it to this stage of the competition, the boxers were rewarded with medals and prize hampers from Goil and H R Industries producers of Madar soap and detergents. The winners received gold medals, while those who came in second were awarded Silver medals from Lord Acquaye of GBA, GOC President Ben Nunoo-Mensah and GBF President, George Lamptey and renowned sports journalist, Sammy Heywood Okine who is also the Communications and Media Manager of the Bukom Fist of Fury.

In the midst of the festivities, the memory of the late Francis Lokko, referee, judge and brother of popular boxing trainer Carl Lokko, was honoured.

All event officials and the boxers from Bronx Boxing Gym where he also assisted his brother, wore red bands to commemorate his passing. Also, there was a minute of silence held in his honour.

The results of the evening’s proceedings are as follows:

In the flyweight contest, Michael Annan of Black Panthers/Bukom won his bout against Abraham Mensah of Seconds Out Boxing Gym/Ekekevo via Split Decision.

In the Bantamweight contest between Daniel Gorsh of Bronx Boxing Club and Aziz Seidu of Akotoku Academy, Daniel Gorsh won via unanimous decision.

In the welterweight division, Sampson Semedzi of The Gym won via fist round stoppage of his opponent, Daniel Oduro of Attoh Quarshie Boxing Gym.

In the heavyweight division, Kwami Sotovi of Fit Square Gym won by a unanimous decision over Oliveira Aryeh of Wisdom Boxing Gym.

In the professional event; Hollie Dogbetor won via TKO in the second around against John Owusu in a 6 round featherweight contest.

Raul Ajaho of Benin won on points against Edward Kambasi of Ghana in an 8 round international featherweight contest.

Issah Samir won via TKO in the 7 th round against John Akulugu in an 8 round Commonwealth middleweight eliminator bout.

Michael “One Bullet” Ansah won via first-round KO of his opponent; Fatiou Sarouna in a lightweight contest.

Finally, Delali Miledzi retained his national and West African Middleweight titles when he won on points against Iddrisa Amadu in a super middleweight Commonwealth eliminator which was a rematch.