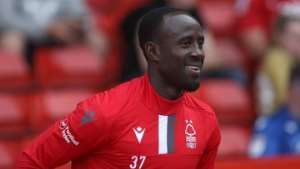 Ghanaian international, Albert Adomah debuted for his new club, Nottingham Forest in the English Championship but unfortunately ended up on the losing side as they suffered a 2-1 defeat to West Bromwich Albion.

The lower tier league of the English Premier League kicked off this weekend with a lot of the match week 1 matches being played on Saturday afternoon.

Nottingham Forest hosted West Bromwich Albion in the opening weekend hoping to get off to a good start but was later edged after conceding two goals in the first half.

Having been included in Forest’s starting lineup, Albert Adomah showed his quality and impressed in the early minutes before going on to couch a goal-scoring chance for Matty Cash to finish.

The early goal was later canceled on the 15th minute courtesy a strike from Kyle Edwards following a mistake from on-loan Manchester City goalkeeper Arijanet Muric.

The goalkeeper’s day went from bad to worse shortly after when a cross from Phillips looped high over his head and into the far post to make it 2-1 to the visitors.

All efforts to draw level failed to materialize with West Brom running away with all three points on the day.

Albert Adomah played the full 90 minutes for his new team and will be hoping to continue his form in subsequent matches to help them pick up maximum points as the season progresses.