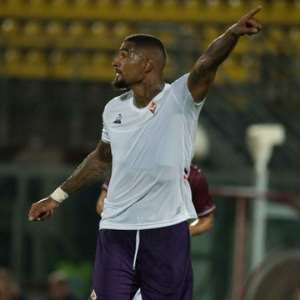 German-born Ghanaian international, Kevin-Prince Boateng played his first match for his new side, AC Fiorentina on Saturday as the Italian Serie A club posted a 1-0 win over Livorno Calcio in a pre-season friendly.

Following weeks of speculations, the former AC Milan attacker completed his move to the Viola last week Wednesday for a transfer fee of €1 million from Sassuolo in a two-year deal.

He quickly joined his new teammates for training to prepare for yesterday’s friendly encounter. Though KP Boateng was omitted from the starting eleven, he was later introduced in the second half by Coach Vicenzo Montella.

A solitary strike from Riccardo Sottil handed Fiorentina a narrow win despite some good end to end action on the day.

Whiles, it was a good exercise for both teams ahead of the upcoming season, Coach Vicenzo Montella particularly took advantage to assess his new arsenal who is expected to give his team a boost upfront when the 2019/2020 season starts.

Kevin-Prince Boateng, now 32, is playing at his 13th club and is hoping to once again make an impact at the end of his stint as he has done at most of the clubs he has played for in the past.