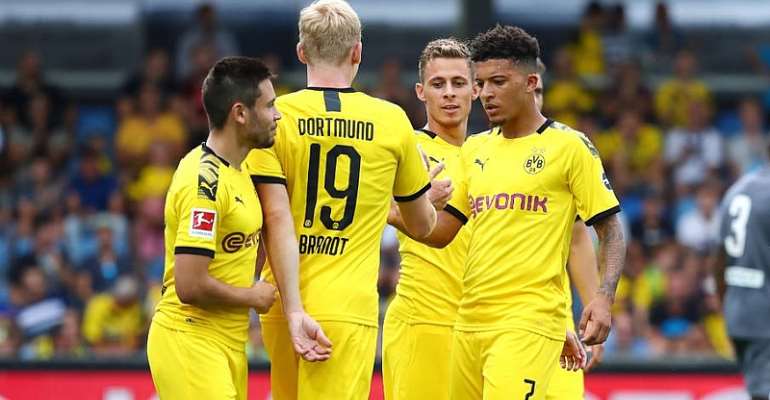 Sancho, 19, fed Spain forward Paco Alcacer for Dortmund's opener just after the break before clinching the victory and his side's first trophy since 2017 with a clinical finish within the final half an hour of play.

Bayern, who pipped Lucien Favre's side to the Bundesliga title last season and lifted the German Cup, were without World Cup-winning left-back and new signing Lucas Hernandez due to a knee problem.

Dortmund's big-name summer arrivals of winger Thorgen Hazard and Julian Brandt, as well as defender Mats Hummels, returning the club after three seasons in Bavaria, were also ruled out due to injuries.

The home side, who finished second in the league last season, had a good early chance.

Portugal winger Raphael Guerreiro broke down the left flank and cut-back to find captain Marco Reus inside the penalty box.

Reus's effort was then well saved by Manuel Neuer after less than a minute of play.

Neuer was in the action once again after a quarter of an hour as he rushed out of his box to close down Alcacer 30 metres from goal. Alcacer beat Neuer to the ball but his shot dribbled past the goal.

Bayern's best opportunity of the first half fell to Kingsley Coman 10 minutes later.

He found himself unmarked in the box but his toe-poke shot was saved by Marwin Hitz low to the right.

Bayern's inability to make the most of the ball in first 45 minutes came back to bite them almost immediately after the break.

The teenager fed striker Alcacer at the edge of the box who beat Neuer with a low shot for a 1-0 lead on 48 minutes.

The Bavarians could have equalised less than a quarter of an hour later after a goal-mouth scramble.

Coman's header was parried by Hitz back to the France winger who crossed to Thomas Muller but his unbalanced shot was blocked on the line.

Dortmund's lead was doubled with 22 minutes to go from a clinical counter-attack.

Sancho was free once again on the right-wing, he burst into the box beyond Bayern's back-four and nutmegged the experienced Neuer to make it 2-0.

Influential Sancho left the field with 10 minutes to play after seeming to be hurt following an off-the-field challenge by Joshua Kimmich.

Bayern coach Niko Kovac brought on Portugal midfielder Renato Sanches and France World Cup winner Benjamin Pavard late-on but they were unable to find the goals to retain the title and the early-season bragging rights.

Bayern start the defence of their league title by hosting Hertha Berlin on Friday and Dortmund play Augsburg on Saturday.