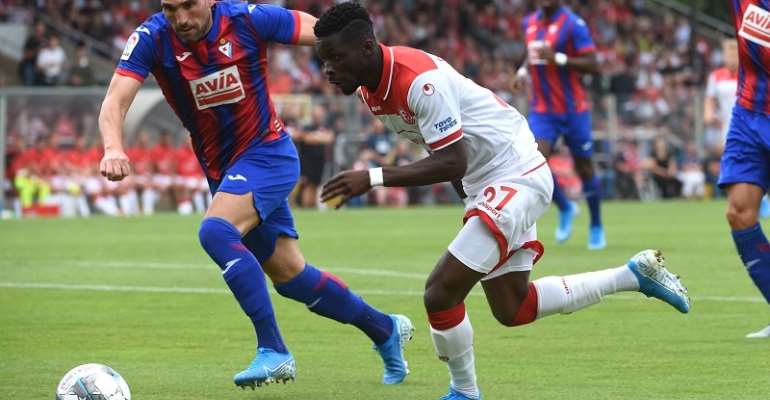 Ghanaian international, Nana Opoku Ampomah scored a brace to help German Bundesliga side Fortuna Düsseldorf to post a 3-2 win over Spanish La Liga side Eibar in a pre-season friendly today.

The attacker was handed a starting role and impressed right from the start of the match with some outstanding link-up play in attack.

His efforts in the final third were awarded just four minutes into the first half when his shot from close range found the back of the net.

Fortuna Düsseldorf could not hold on to end the first half with the lead and allowed Japanese midfielder Takashi Inui to restore parity for the Spanish side on the 20th minute.

The second half resumed with both sides playing some entertaining football in hopes of getting on the scoresheet to take the lead. Eight minutes into play, striker Rouwen Hennings scored to restore Fortuna’s lead before Eibar pulled parity for the second time on the day courtesy a fine strike from Asier Benito Sasiain.

Nana Opoku Ampomah grabbed the winner with just 9 minutes to end proceedings to ensure his side won the match with a 3-2 scoreline.

This is the first match the player has scored in since completing his move from Belgian side Waasland-Beveren.

His countryman, Bernard Tekpetey also featured for the German side in the pre-season friendly.