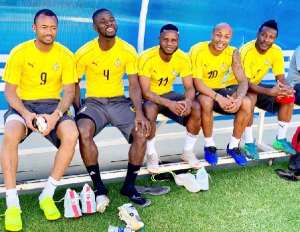 Chairman for the Parliamentary Select Committee on Youth, Sports and Culture, Hon. Alex Agyekum has shockingly reiterated that there is nothing wrong in government’s decision to spend $4.5 million dollars on Black Stars at the just ended 2019 Africa Cup of Nations (AFCON) in Egypt.

According to the Youth and Sports Minister, Ghana budgeted 6.3 million US Dollars for the Black Stars training camp and AFCON campaign.

“As to whether the money spent is big or not it is already gone and I see nothing wrong with it, also what we are saying is that after the Sports Minister’s report there will be some recommendations such as value for money analysis and as to how the monies were disbursed”, the Member of Parliament for Mpoho said.

“Every post-mortem analysis we will carry out must bring improvement, tournaments come with prestige and the glory that brings to the country,” he added.

Ghana’s dream of ending a 37-year wait for a trophy was ended via penalty shootouts defeat to Tunisia in the Round of 16.