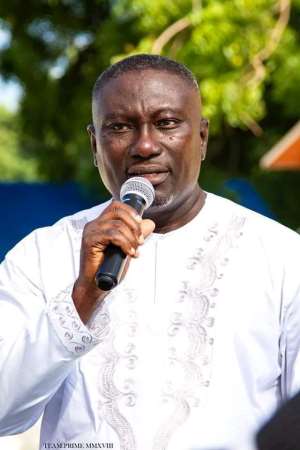 The shocking death of boxing fan Nii Kpakpo Allotei-Cofie was announced this morning Friday, August 2, 2019, on Social Media, to be precise Facebook.

I did not believe so I called his number and his daughter picked and confirmed that his dad is no more. How sad. I shed some tears, gathered courage and went to the gym to do my daily schedule in sorrow.

Born on June 20, 1968, Herbert Allotei-Cofie was a keen sports lover who loved cycling and boxing. His passion was seeing the development and display of young boxers.

His main profession was Tourism, before the Sports promotion. He was the CEO of Events Unlimited; Founder of the West Africa Tour Guides Association (WATGA). He was also involved in Real Estate business and a founding member of the Bukom Fist of Fury Boxing League and Championship Fight Nights organization.

Herbert will be remembered most for the Jamestown Weekend Boxing programme which he organizes in collaboration with the Ga Mashie Development Agency (GAMADA), Accra Metropolitan Assembly (AMA), The Ghana Boxing Authority (GBA), Ghana Boxing Federation (GBF), United Boxing Coaches Association of Ghana UBCAG, Attoh Quarshie Boxing Gym, Sea View Boxing Club, Charles Quartey Boxing Foundation and many others including Graphic Communications Group, The Allotei-Cofie Boxing Promotions is also supported by McDan Group of Companies and he was supposed to direct the Asafotufiami boxing show on Friday the 02nd of August 2019 at Big Ada.

In fact, his absence would be missed and missed by the indigines of James Town as he was trying to promote tourism and sports in the Greater Accra region.

He was survived by his darling wife, Lilian Allotei-Cofie of Bozomah clothing fame and children.

On behalf of the Ghana Boxing Family, we pray he rests in peace in the Almighty Lord’s bossom.

Nii Allotei, we really miss you, Yaa wo ye he dzolemli.