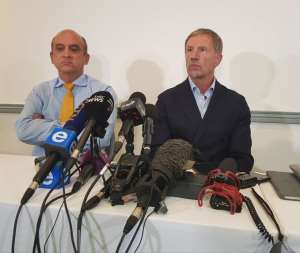 English tactician, Stuart Baxter has announced his resignation as head coach for the South Africa national team ahead of the qualifiers for the 2021 Africa Cup of Nations (AFCON) as well as the 2022 FIFA World Cup.

The manager spent two different stints with the Bafana Bafana with the first appointment coming way back in 2004 where he was tasked to qualify the team for the 2006 world cup.

Having failed to achieve the target, the coach quit his job and moved on to coach Finland, Kaizer Chiefs, Gençlerbirliği, and SuperSport United between 2008 and 2017.

Later on May 4, 2017, Stuart Baxter was named as South Africa coach for a second time to replace Ephraim Mashaba who was sacked in December 2016.

During his second stint with the Bafana Bafana, the 65-year-old managed to qualify the side to the 2019 Nations Cup where they reached the quarter-finals before being knocked out by the Super Eagles of Nigeria.

Weeks after the AFCON campaign, he has tended in his resignation letter, whiles citing that it is his personal decision and has nothing to do with a monetary misunderstanding with South Africa Football Association (SAFA).

The aftermath of the 2019 AFCON has seen other coaches including Herve Renard, and Clarence Seedorf losing their positions at Morocco and Cameroon respectively.