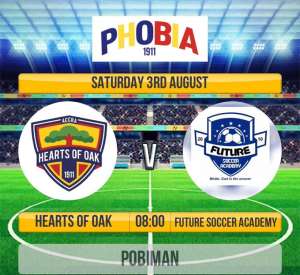 Ghana Premier League giant, Accra Hearts of Oak has lined up a friendly match against lower division side Future Soccer Academy as they step up preparations for the upcoming season.

Though the date for the return of the Ghana Premier is still unknown, the Accra based side has been training in the off-season in the past days. They have now decided to engage in some friendly matches to give head coach Kim Grant an opportunity to assess the fitness level of his players.

In line with that, they are set to play Future Soccer Academy at the Pobiman Park on Saturday, August 3, 2019.

The friendly will be in two parts with the club expected to play two matches on the day. The two matches will be played on 08:00GMT and 10:00GMT respectively.