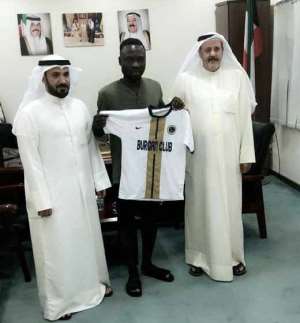 Kuwaiti side Burgan SC has completed the signing of former Aduana Stars forward Bright Adjei on a one-year deal with an option to extend at the end of the upcoming season.

The player who couched a name for himself on the local scene after impressing for the Dormaa based club in the past years parted ways with them following the expiry of his contract last June.

He has been in search of a new club ahead of the start of the 2019/2020 and has successfully secured a move to the Kuwaiti club.

Following fruitful negotiations and a successful medical examination, Bright Adjei has joined Burgan SC on a one year deal.

The pacey and tricky attacker is the first player to have won the CNN Goal of the Week award on two occasions after picking the accolades during the 2016 season.

Bright Adjei, 25, is also a formal player of Tema Youth but is now bent on enjoying success with his new club at the end of next season.

He was part of the Aduana Stars team that won the 2016/2017 Ghana Premier League title and has featured in CAF Champions League in the past.