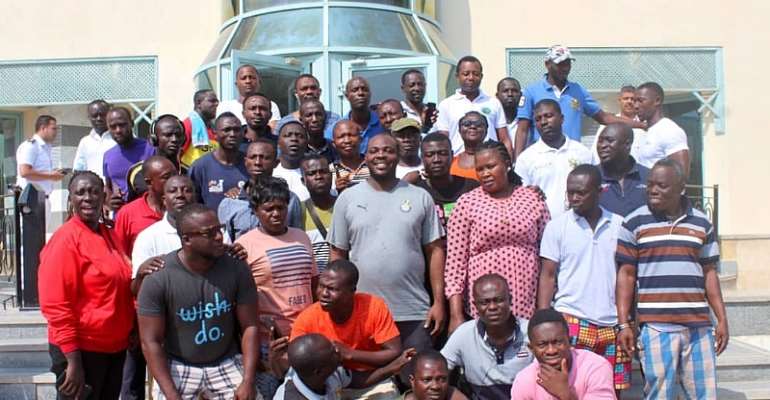 About 21 Ghanaian supporters are still in Egypt on at the expense of the country despite the 2019 Africa Cup of Nations tournament having ended on July 19.

Over 700 supporters were flown to the North African country by the Youth and Sports Ministry to support the Black Stars.

However, some are yet to return to the country despite the team being kicked out by Tunisia 24 days ago.

“Twenty-one supporters are still in Cairo hoping to come back tomorrow,” the General Secretary of the Ghana Supporters Union, Awal Osman Kassim is reported by442gh.com to have told Accra-based Happy FM.

He added “About 40 supporters came on Saturday including me. We were well taken care of and those there are not lacking anything. They sleep in good rooms and eat good foods.”

Last week, Public Relations Officer of the Youth and Sports Ministry, Elvis Adjei-Baah could not state the number of supporters flown to Egypt for the tournament.

He explained that the ministry had decided on flying 100 supporters but following discussions with the Ghana Supporters Union, the number increased.

However, the extra supporters were not fully sponsored by the ministry as they only helped them in getting visas.

“Before we went to Egypt, the ministry’s project committee met with Ghana Supporters Union and told them that we [ministry] can only sponsor 100 fans to the tournament, “he revealed.

“The union led by Abraham Boakye wanted more. So they said that we should vouch for them to get about 300 visas for supporters who were going to take care of their own flight, feeding and accommodation and we agreed.”

“Then again I know that there are some corporate organizations that sent supporters to Egypt.”

“When we got to Egypt, [after Ghana’s] first game we realized that there was a problem with the attendance of supporters at the stadium. So there was an arrangement for the mobilization of supporters both in Egypt and from Ghana. We ended up shooting up in the number of supporters.”