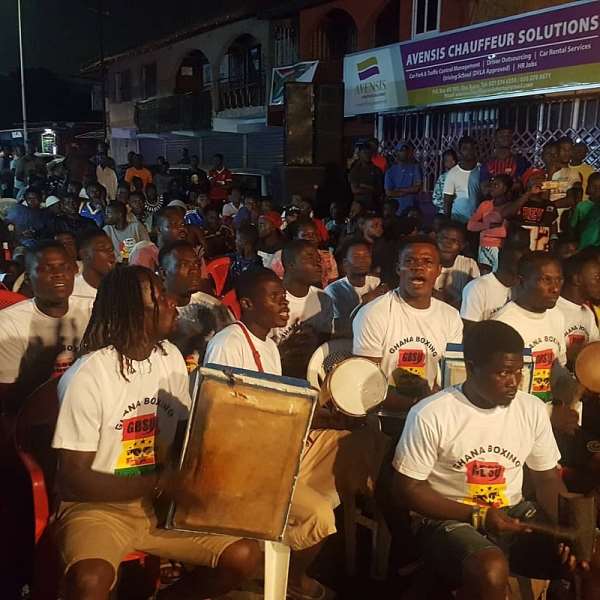 Some members of the Ghana Amateur Boxing Team, the Black Bombers performed marvelously at the first semi final of the novelty Bukom Fist of Fury Boxing League at Osu 5 Junction in Accra last Saturday.

The event featured six juvenile bouts on the undercard, followed by the main event card which comprised seven amateur bouts.

There was a really good turn out and the crowd was pleased with the evening’s bouts. They were also well engaged with the event, even expressing their views on some of the bouts they witnessed.

As usual, the Ghana Boxing Supporters Union (GBSU) were there in their number and they did not disappoint. They livened up the venue with their array of Jama tunes to keep the crowd entertained.

Besides the crowd being displeased with the result of the hard-fought bout between Daniel Oduro of Attoh Quarshie and Stephen Quaye of Fit Square/ Ghana Police, the event was successful.

The results of the evening’s bouts are as follows:

Michael Bibi of Attoh Quarshie won automatically due to the disqualification of his opponent, Michael Arhin of Will Power Gym for taking part in a professional boxing bout.

The next semi-final comes off at the Lord’s Wembly this weekend and it is definitely going to be another crowd puller.

President of the Ghana Boxing Federation, George Lamptey expressed his satisfaction with the performance of the boxers, especially those in the national team.

He noted that the Bukom Fist of Fury Boxing has kept most of the Black Bombers busy training as there are plans by the National Sports Authority and Ministry of Youth & Sports to take them out for trials with other countries as the African Games approach.

He appealed to other companies to support Ghana Boxing as they are the real potential world champions in Ghana Sports.

He expressed that a fraction of the money being pumped into football can do much for boxing.

The finals of the exciting league come off at the Bukom Boxing Arena on August 3, 2019, with a combination of juvenile, amateur and professional fight which would be put up in collaboration with Landmark Boxing Promotions.