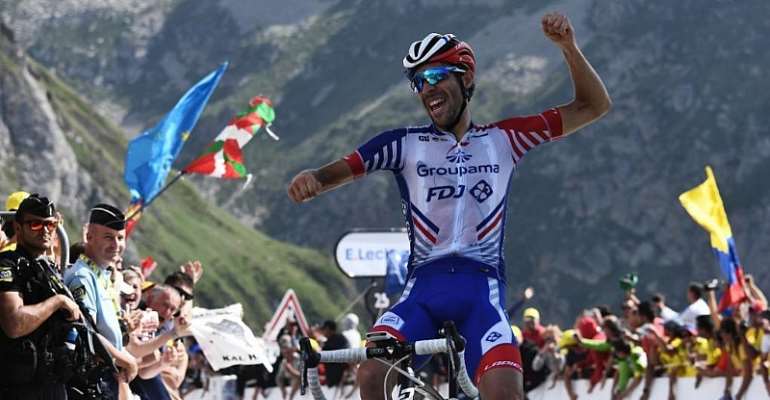 French cycling fans celebrated on Saturday as Thibaut Pinot conquered the Pyrenean summit of the Col du Tourmalet in stage 14 of the Tour de France. Julian Alaphilippe followed close behind to extend his grip on the leader's yellow jersey.

Defending champion Geraint Thomas lost 35 seconds after being dropped at the death, while his Ineos co-captain Egan Bernal finished a few seconds behind the winner at the first of seven summit finishes over 2,000 metres.

Thomas is now over two minutes behind Alaphilippe in the general classification.

As the 117-km stage 14 climbed above the tree-line and above the mist where the oxygen levels were lower and fans at fever pitch lent a hint of insanity to proceedings, contenders for the overall victory gradually fell by the wayside.

Adam Yates, Dan Martin, Rigoberto Uran, Nairo Quintana and Jakob Fuglsang, all suddenly wilted one after the other as the FDJ pair kept up the pace.

Few expected the yellow jersey Alaphilippe to thrive on Friday's time-trial, which he won and fewer still here on the Tourmalet.

But Alaphilippe dug deep and when he climbed out of the saddle to win the sprint for second cheers for him were even louder than those for the popular Pinot.

"Since the start of the Tour I've been targeting this stage, this is the one I wanted, the mythical Tourmalet," said Pinot.

"We are going into the third week now, people will be tired, but this is where I feel best," added the Frenchman, who is placed sixth overall, 3mins 12sec off Alaphilippe.

Pinot has long been thought a potential champion this year with the nation waiting for its first Tour de France win since 1985.

Helped up the hill by young French champion David Gaudu Pinot never faltered on the long final climb and his team boss at FDJ Marc Madiot was ecstatic at the finish.

"Great determination, great work ethic and sheer talent, were lucky to have these guys with us," said Madiot who vowed his team would attack today.

Come out and speak, your silence is worrying; treat LGBTI is...
49 minutes ago