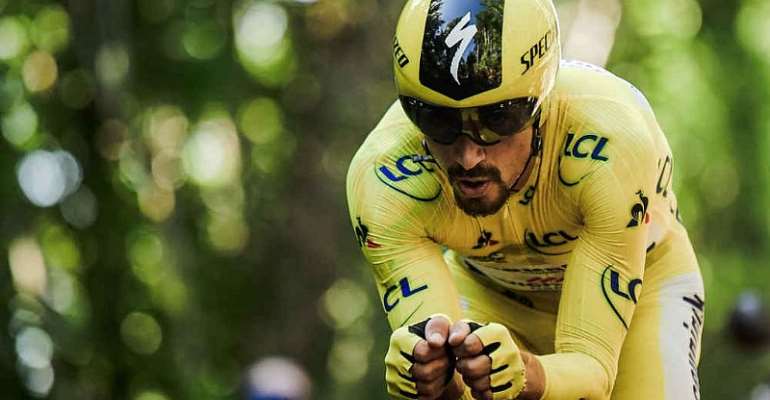 French rider Julian Alaphilippe extended his overall lead at the Tour de France on Friday, winning the 27.2km individual time-trial around the southern city of Pau on stage 13 to keep the yellow jersey and send home fans wild.

Welshman Geraint Thomas was second, the defending champion dropping 14 seconds on the French overall leader to slip to 1min 26sec adrift in the general classification after the race-against-the-clock around the Pyrenean town.

"If he carries on like this he'll win the Tour," the 33-year-old Thomas forecast at the finish line.

"He's going incredibly well and is certainly the favourite or the one to watch at the moment," he added.

"But there is a long way to go and a lot of hard stages to come."

Alaphilippe has been going from strength to strength this season and said he was taking his responsibility to the French fans very seriously.

"I never set off thinking about pulling off this win. Nobody is more surprised than I am," said the Deceuninck Quick-Step world No.1 who has lit up the Tour with a series of jaw-dropping attacks.

"I just wanted to keep the jersey, but to win the stage, on this form, is just totally amazing," said the 27-year-old former soldier.

Friday was the 100th anniversary of the introduction of the yellow jersey, with Frenchman Eugene Christophe wearing the first in 1919, only to lose the overall race on the second-last stage.