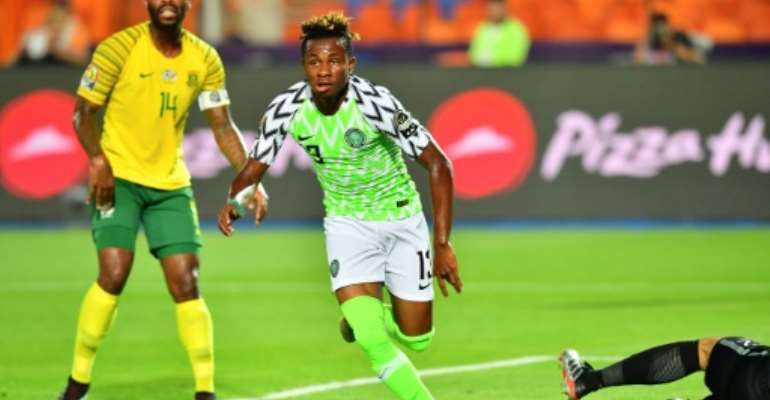 Samuel Chukwueze scored the opening goal in a 2-1 win over South Africa in the quarter-finals. By Giuseppe CACACE (AFP/File)

He was young enough to participate at this year's Under-20 World Cup, but Samuel Chukwueze is assuming a far greater role as a future Nigeria lynchpin with his country attempting to capture a fourth Africa Cup of Nations title.

At 20 years and 49 days, Chukwueze became the youngest scorer at this year's tournament as he grabbed his first international goal for the Super Eagles in the quarter-final win over South Africa.

It has been a meteoric rise for the youngster, signed by Villarreal in 2017, following a strong debut season in Spain's top flight which included a goal in April's thrilling 4-4 draw with Lionel Messi's Barcelona and a match-winning strike against Girona that lifted his side out the relegation zone for good.

While he may not be cut from the same cloth as the Argentine, comparisons with another left-footed wizard, the recently retired Arjen Robben, are plentiful.

Inspired by the former Dutch star growing up, Chukwueze concedes he would do well to come anywhere close to what Robben achieved as a former Champions League and eight-time Bundesliga winner with Bayern, a World Cup finalist, and league champion at Chelsea, Real Madrid and PSV Eindhoven.

"Chukwueze has a good left foot, is quick, has a low centre of gravity -- which gives him very good balance -- and can deliver and score," was Nigeria coach Gernot Rohr's Robben-esque appraisal of his winger.

Yet the German has taken a steady approach to blooding Chukwueze, handing him a start in the opening win over Burundi before restricting him to a pair of substitute appearances over the next three games in Egypt.

"We're here to win the title. Sitting on the bench doesn't make me feel bad, it makes me wait for the chance I get to help the team like I did today," Chukwueze said after his man-of-the-match display against South Africa.

Chukwueze came close to joining Arsenal before arriving at Villarreal, following in the footsteps of striker Ikechukwu Uche, who won the 2013 Cup of Nations with Nigeria during his four-year spell at the Spanish club.

"He has a quality that just overflows and you can't stop, like a river," said Villarreal reserve team coach Miguel Alvarez, who helped Chukwueze make the step up to the top tier.

Both he and Victor Osimhen, yet to feature in the tournament here, formed part a core part of Nigeria's Under-17 World Cup winners from 2015, and forward Ahmed Musa believes Chukwueze will become one of the stars of the senior side. 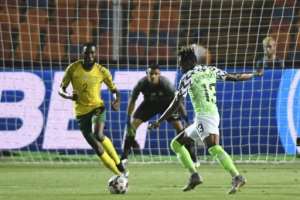 Samuel Chukwueze has made two starts and two substitute appearances in Nigeria's five games in Egypt. By Khaled DESOUKI (AFP/File)

"I think with time he is going to be one of the best players we have in the Super Eagles team," Musa told reporters after the quarter-final victory.

"The old players in the squad are gradually winding down and will not be here in a couple of years from now.

"So, we definitely need players like them to step up and take over from us."

Chukwueze was not part of the 2018 World Cup campaign, where a youthful squad failed to go beyond the group stage, but Rohr says the increased maturity and influx of fresh faces will serve return Nigeria well as they target a return to the top in Africa.

Their next test comes on Sunday against an impressive Algeria team that have looked a cut above the rest in Egypt.