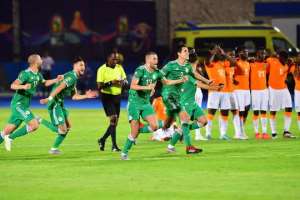 The Desert Foxes of Algeria has eased past the Elephants of Cote d’Ivoire to progress into the semi-finals of the 2019 Africa Cup of Nations (AFCON) after emerging as 4-3 winners after the penalty shootout.

The battle between the North African and West African side live up to expectations with each team playing at top level in search of the victory that would give them the push into the semi-finals.

Algeria star man Riyad Mahrez was presented with a glorious opportunity to give his side the lead just 13 minutes into the first half but his effort missed the post by a whisker.

Seven minutes later, the experienced Sofiane Feghouli received a pass at the edge of the 18-yard box and fired his shot with a good technique which beautifully ended up in the back of the net.

The Elephants upped their game and tried to get back into the game but all the half chances they created went waste as they ended the first 45 minutes on the losing side.

Early in the second half, Algeria was awarded a penalty followed a ruling by the Video Assistant Review (VAR) that found goalkeeper Sylvain Gbohouo of an offense. Attacker Baghdad Bounedjah stepped up to take the penalty but disappointingly failed to convert as his effort smashed the crossbar.

English Premier League players Wilfred Zaha and Jonathan Kodjia combined to restore parity for Cote d’Ivoire on the 69th minute. Kodjia received a pass from Zaha and fired a shot from the edge of the box into the back of the net though it appeared feeble.

None of the sides managed to find that winning goal at the end of the 90 minutes plus extra time and forced the match to be decided through the lottery of penalties.

At the end of it all, the Desert Foxes edged the Elephants 4-3 to ensure they progressed into the semi-finals where they have set up a date with the Super Eagles of Nigeria.