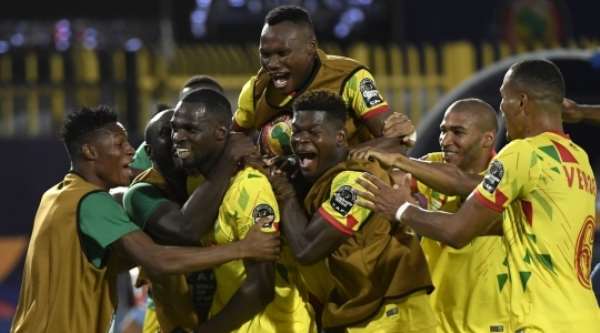 The Squirrels of Benin has produced one of the shocks of the 2019 Africa Cup of Nations (AFCON) to beat the Atlas Lions of Morocco to ensure they advance into the quarter-finals of the tournament.

The North African country faced off with the West African side on Friday, July 4, 2019, at the Al Salam Stadium hoping to capitalize on their 'favorite of the tournament tag' to see off their round of 16 opponent.

In a shocking twist though, it has been the Squirrels of Benin who has secured a spot in the last 8 of the prestigious tournament.

A cagey first half encounter produced limited chances with either side finding it difficult to break down the defense of their opponent. The few half-chances that fell to the Moroccans were either wasted by their attackers or saved by goalkeeper Saturnin Allagbe.

An early first-half goal from Moise Adilehou gave Benin the lead but was canceled later on the 76th minute by Leganes attacker Youssef En Nesyri who capitalized on a defensive blunder to restore parity for his side.

Ajax star Hakim Ziyech had an opportunity from the penalty spot in the dying minutes to win the match for Morocco but his effort only found the frame of the goalpost before going into touch.

The match eventually traveled into the extra time with Herve Renard’s men piling pressure on their opponent. They were however always thwarted in their tracks by the determined backline of Michel Dussuyer’s team.

The Squirrels later went on to win the penalty shootout to advance into the quarter-finals of this year’s tournament currently ongoing in Egypt. They managed to convert four of their kicks, three more than Morocco who only scored one.