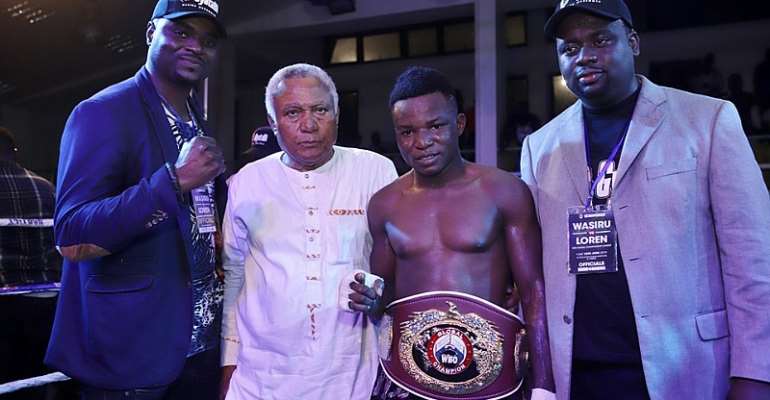 E & J Boxing Promotions has hailed the new WBO Global Super Bantamweight Champion, Wasiru Mohammed for his great achievement on Saturday at the Accra Sports Stadium where he stopped stubborn Tanzanian boxer, Lorent Japhet in the 11thround of their scheduled 12 rounder for the global title.

Thanks to the fans, the supporters, the sponsors, WBO, Ghana Boxing Association and Wasiru's team for making this possible. Ghana is proud of you!

Wasiru Mohammed already holds the WBO Africa Super Bantamweight title belt and with his new belt, he would be rated among the best 10 in the world.

WBO Africa president, Samir Captan gave credit to the Tanzanian boxer, Lorent Japhent who proved to be very durable and gave Wasiru Mohamed a really good fight which boxing fans at the Stadium Sports Hall had much to cheer about.

John Marfo, co-manager of E & J Promotions said now is the time for Wasiru to hit the world stage, and very soon he is going to wear the WBO world title.

Wasiru’s coach Lartekwei Lartey who is also the assistant trainer of the Black Bombers also congratulated Lorent and his coach for giving them a good fight.