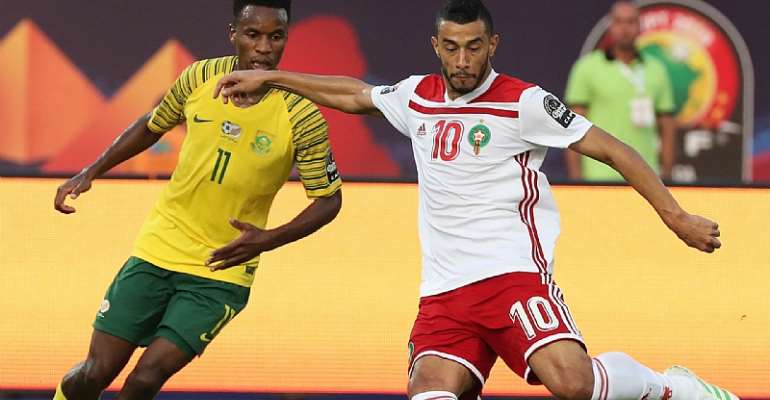 The Atlas Lions of Morocco has qualified into the knockout phase of the 2019 Africa Cup of Nations (AFCON) tournament alongside the Elephants of Cote d’Ivoire.

The two teams finished first and second on the Group D standings with 9 and 6 points respectively ahead of the Bafana Bafana of South Africa and the Brave Warriors of Namibia.

The Elephants posted an emphatic 4-1 victory over the Brave Warriors in their last group match to ensure they joined Morocco who had already cemented their place in the round of 16 following two successive wins in the first two matches.

Three second-half goals from Serey Die, Wilfred Zaha, and Maxwell Cornet on top of Max Gradel’s first-half strike was enough to see Cote d’Ivoire cruise past their opponent at the 30 June Stadium.

Then elsewhere at the Al Salam Stadium, a late equalizer from attacker Mbark Boussoufa handed Herve Renard’s Morocco all three points, giving them a total of 9 points from the group matches to see them take the top spot.

At the end of it all, it is Morocco and Cote d’Ivoire who have safely advanced into the knockout stage from group D. South Africa has a chance of joining the two teams but has to wait until all matches in the group phase are played.

I won’t bow to pressure to make Parliament a ‘rubber stamp o...
46 minutes ago