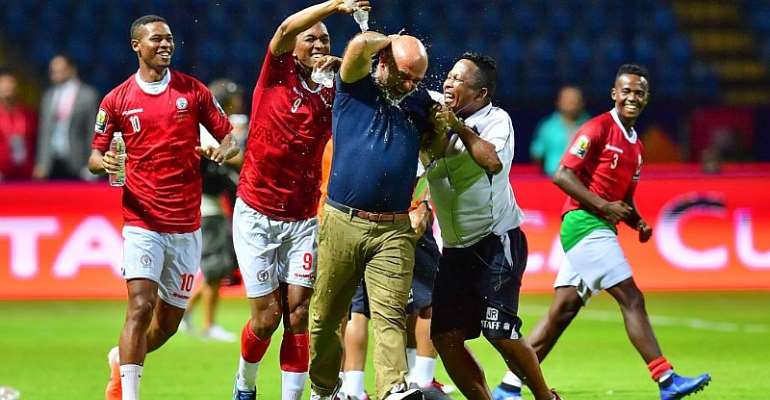 Madagascar coach Nicolas Dupuis paid tribute to his squad after their 2-0 win over Nigeria secured top spot in Group B. Goals from Lalaina Nomenjanahary and Charles Andriamatsinoro earned the Cup of Nations debutants a famous victory in Alexandria.

"I have to thank the players who made me proud and the people of Madagascar proud,” said Dupuis.

“It's a real achievement for us. When I saw the group we were given we all put Nigeria as favourites. I think that Nigeria are still a strong favourite for the tournament."

As a reward for their exploits Madagascar, the first newcomers since Cape Verde in 2013 to reach the knockout stages, will face one of the four best third-place finishers in the last 16.

Focus
"I find that the players are more and more concentrated," said Dupuis. "But I have always played the same players and that's going to be a major problem now.”

Madagascar will be without midfielder Marco Ilaimaharitra who received a yellow card for the second time in the tournament and will be suspended for the last 16 match.

Dupuis added: "I really wanted to make the Madagascar people dream and we did but it came at a bit of a cost with all the effort we put in."

"Madagascar can go very far. They beat us. They beat Burundi, a team that's not easy to beat. Anything can happen in knockout games. I think they're capable of doing this again."

W/R: Five wounded after residents of Ampatano and Kamfakrom ...
8 minutes ago