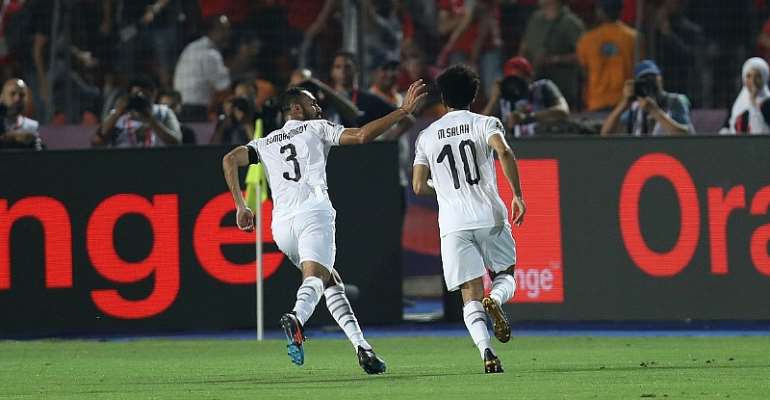 Egypt’s star man Mohammed Salah showed fine form in his third successive match for the Pharaohs to inspire them to a 2-0 victory over the Cranes of Uganda on Sunday evening.

The two teams faced off for their respective last round of matches in the group phase of the 2019 Africa Cup of Nations. At the end of it all, it is the host nation who came out on top with a vital victory to ensure they topped Group A.

An impressive start to the match could have resulted in Uganda scoring at least 3 goals but they were constantly denied by Egyptian goalkeeper Mohammed El Shenawy.

Later, the victors grew in confidence and pushed the Cranes into their shelves for a couple of minutes. Thirty-six minutes into the first half, the Pharaohs broke the deadlock through fans favorite Mohammed Salah.

The Liverpool attacker stepped up and brilliantly converted a free-kick from the edge of the 18-yard box after he was brought down by defender Hassan Wasswa.

The equalizer pushed Egypt to play at top level for the remaining minutes of the first half until they got a second goal courtesy a good strike from Aston Villa defender Ahmed Elmohamady.

A second half of packed action could not produce any goal as referee Maguette N'Diaye whistled to bring the match to a close.

The win means the Pharaohs has won Group A with an enviable 9 points as they cruise into the knockout stage of the tournament. Uganda who finished 2nd will also advance into the round of 16 after amassing an impressive 4 points from 3 matches.