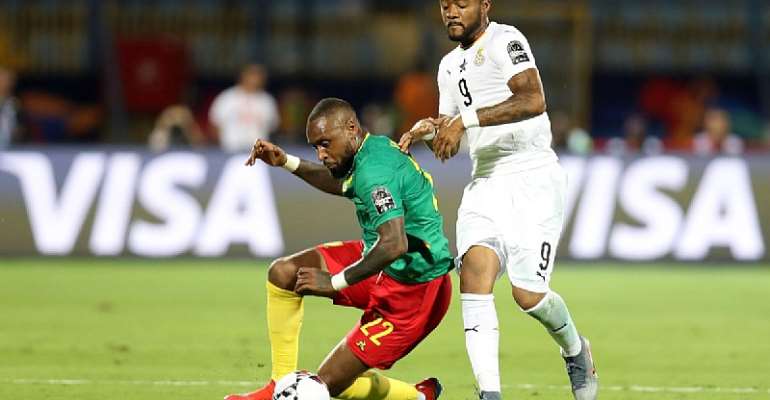 The Black Stars of Ghana has played a goalless draw game with the Indomitable Lions of Cameroon in their second Group F match of the 2019 Africa Cup of Nations (AFCON) tournament.

In a cracking match touted the battle of the West African giants in Ismailia, neither side could find the back of the net at the end of a pulsating 90 minutes.

Ghana who needed the 3 points more showed purpose and pushed their opponent for most parts of the match in search of an equalizer that would have won the match for them.

Winger Christian Atsu who tried to make things happen for the Black Stars in the early minutes of the first half was forced off the pitch after picking what appears to be a hamstring injury.

From there on, it was the Indomitable Lions who came close to scoring but were denied by Ghana goalkeeper Richard Ofori.

In the second half, some end to end action resulted in both sides creating some decent opportunities that could have easily resulted in a goal. Unfortunately, the players that had the final touches wasted them all.

Late into the game, Ghana coach James Kwesi Appiah introduced young striker Kwabena Owusu to join Jordan Ayew and veteran attacker Asamoah Gyan upfront. Right after coming unto the pitch, Owusu went on a good solo run and rifled a shot that almost found the back of the net.

This time around, it was the frame of the crossbar that denied the 4-times African Champions what would have been a deserved victory.

The match eventually ended goalless with Ghana and Cameroon sharing the spoils. The Indomitable Lions lead the Group F standings with 4 points whiles Ghana comes in 2nd with 2 points from two matches.

What that means is that Ghana will have to win her final Group F match against Guinea Bissau to have any chance of qualifying into the knockout stage.