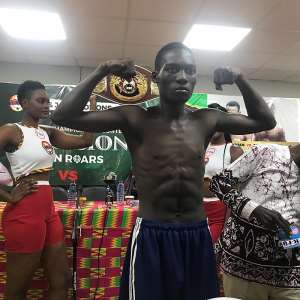 Ellis Quarshiga, Co-Director / Manager of WBO Africa Super Bantamweight Champion has disclosed to the media that E & J Boxing Promotions have great confidence in Wasiru Mohammed as a potential world champion because he is committed to the sport and very serious with his training.

Speaking at the ‘Ascension’ Weigh-In and Press Conference ahead of the first WBO Global title bout in Ghana against Tanzanian Lorent Japhet at the Accra Sports Stadium, he said they believe in Mohammed who is also called ‘Gyata Bi’ as the next world champion from Ghana.

He hinted that E & J Promotions is ready to support any good boxer who proves his discipline and potential.

The WBO Global bout named ‘Ascension- The Lion Roars’ comes up on Saturday with a lot of side attractions as contestants for the Miss Ghana 2019 title will be there to introduce themselves, entertainment from renown singers and rappers, live broadcast of the Afcon 2019 match between Ghana and Cameroun, the defending champions and many more.

WBO Africa President Samir Captan urged the boxers to put up a good performance as the Global belt is the last straw to the world title. He also asked boxing fans to be disciplined at the venue and display the Ghanaian hospitality.

Mo Wasiru told the media he wants to suck the blood of his opponent, while Japhet replied that in Tanzania, they eat lions, setting the stage for a big showdown.

So all is set as Wasiru Gyata Bi Mohammed and Japhet Loren of Tanzania both made their weight for their WBO Global title fight with Wasiru Mohammed weighing 120lbs and Loren Japhet - 121.5lbs

Some companies who have associated with the Gyata bi brand and showed up at the event were Alisa Swiss Spirit Hotel, Adekyeman Savings & Loans, and Carmu.

Meanwhile, Tema based Alpha Industries, producers of Top Choco and many other cocoa and food drinks have also offered support to E&J Promotions ahead of the WBO Global junior featherweight title fight at the Accra Sports Stadium this Saturday, June 29, 2019

Marc Skaf, Managing Director of Alpha Industries who have come on board as sponsors of E&J Promotions' fight show said Gyatabi is a great boxer worth supporting.

Other crack boxers on the bill include Manyo Plange, Eric Quarm, Emmanuel Otoo and others.

Rates for the fight range from 20ghc for Popular Stand, 50ghc for Regular and 100ghc for VIP Ringside.