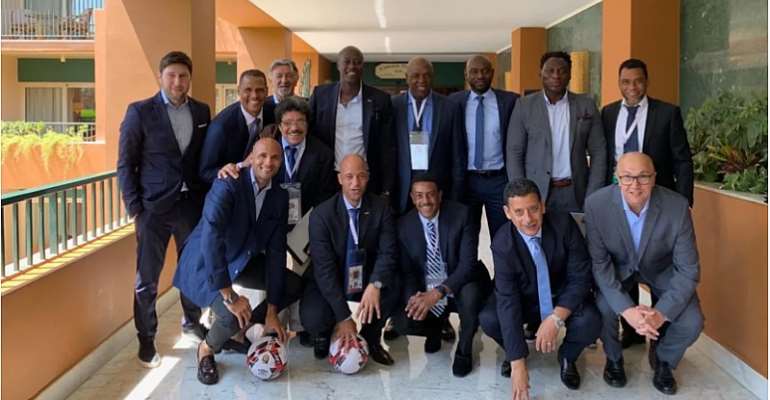 Every game in Total AFCON Egypt 2019 will have the Total Man of the Match award for the best player of the match. Those who make the decision are the CAF Technical Study Group (TSG) members.

For this AFCON, 12 persons made up ex-players and current coaches constitute the CAF TSG. They are spread across the six-match venues - two per venues, with the support of a immediate past CAF Technical Director, Abdelmoneim Hussein 'Shatta' as a consultant.

CAF Director of Technical and Development, Raul Chipenda said TSG members are expected to put together a technical report for all the 52-matches at the tournament.

"At the end, they will prepare the technical report of the competition that will be analysed at a conference later in the year with all Member Associations. They will also identify tactical trends, strengths and weaknesses which will be discussed thoroughly in the quest to improve the technical and tactical aspect of the game on the continent," Chipenda told CAFOnline.com.

Here are the members;

Group A – Cairo International Stadium
Belhassen Malouche (Tunisia)
A member of the CAF Technical and Development Committee, he served in the same capacity during the 2012 Africa Cup of Nations. The Tunisian renowned instructor has served as Technical Director in Tunisia, United Arab Emirates and Jordan. He was FIFA Development Officer for the Cairo office in 2010. Since 2008, he has been a FIFA instructor.

Serame Letsoaka (South Africa)
Letsoaka was a former Bafana Bafana Assistant Coach and Technical Director of the South African Football Association. He managed several domestic sides, including SuperSport United, Golden Arrows, Bloemfontein Celtics and Free State Stars. He is currently Technical Director of Botswana, a position he has been occupying the last 12 months.

Group B – Alexandria Stadium
Jean Michel Benezet (France)
He was FIFA technical director from 2006 and till 2016 supervising all the technical aspects of competitions during that period. Since leaving FIFA, he acts as a consultant to the CAF Technical and Development Committee.

Abrham Mebratu (Ethiopia)
Mebratu was the coach of Yemen U-23 team before his elevation to Technical director for Yemen football association. He was promoted to Head Coach of Yemen in 2017, guiding the team to their first ever qualification to the Asian Cup of Nations finals. He has been the head coach of Ethiopia since July 2018.

Group C - June 30 Stadium
Edgar Watson (Uganda)
Watson was a star in Ugandan football as a player in 1990s with Miracle FC and SC Villa. He Won CEFAFA Cup with the Cranes as well as numerous domestic trophies with Villa before hanging his boots in 2003. He is currently General Secretary of the Federation of Uganda Football Associations (FUFA), and also a member of the CA Technical and Development Committee.

Daniel Amokachi (Nigeria)
“The Bull” as Amokachi was nicknamed during his playing days was a member of the Super Eagles squad that took the whole world by storm in 1994. He also played in Belgium, England, Turkey and the USA before hanging his boots in 2005. He scored twice in the 1994 FIFA World Cup and won the Africa Cup of Nations same year. He has served as Assistant trainer with Super Eagles on two stints.

Group D - Al Salam Stadium
Khalilou Fadiga (Senegal)
A prominent member of the Senegal’s golden generation of 2002, Fadiga played for a number of European teams including Club Brugge, Gent, Germinal Beerschot (Belgium), Auxerre (France), Internazionale (Italy), Bolton, Derby County and Coventry City (England). He scored against Uruguay in the 2002 FIFA World Cup, and also reached the AFCON final in 2002. He has been a member of the CAF Technical and Development Committee since 2015.

Herita Ilunga (DR Congo)
The former DR Congo left back is counted amongst the best Congolese football exports to Europe. Ilunga played in France, Spain, and England with the highlight of his career being four fruitful seasons with Ligue 1 side Saint Etienne. He hanged his boots in 2016 and currently, sits on the CAF Technical and Development Committee.

Miller Gomes (Angola)
Gomes played for Benfica Luanda and Sagrada Esperanca in his native Angola. He started his coaching career in 2000 with the former before going on to coach Angola women’s team. He has stints with Angola U-20 and U-23 teams, and also local side Petro Atletico and Recreativo do Libolo.

Group F - Ismailia Stadium
Diomansy Kamara (Senegal)
With 51 caps for Senegal, Kamara has his name amongst the elite class of players to have donned the Teranga Lions shirt. Born in Paris, he had a lengthy career playing in France, Italy, England, Scotland, Turkey and India, famously for his spell with English side Fulham.

Jamal Fathi (Morocco)
Fathi played for Raja Club Athletic, KAC Marrakech and Al MAseera in Morocco. He donned the Atlas Lions shirt between 1988 and 1990, before starting his coaching career. He was the coach and technical director for Raja and steered them at their historic appearance in the debut FIFA Club World Cup in Brazil 2000. He also guided the Morocco U-20 team at the 2005 FIFA U-20 World Cup. He is a CAF Instructor.

He is better known by football fans in his native Sudan and also in Egypt by the name “Shatta” meaning ‘red pepper’ in Arabic. He played for Al Thoraya and El Tahrir in Sudan before joining Egyptian giants Al Ahly where he won numerous titles with the Cairo Red Devils. He was for more than a decade CAF Director of Technical and Development till 2017.

Doctors threaten strike from October 1 over arrears
51 minutes ago