AFCON 2019: It Was Difficult Playing Against Nigeria, Admits Naby Keita 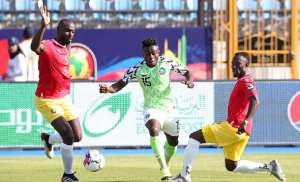 Guinea midfielder, Naby Keita, has revealed it was not easy playing against Nigeria.

The Syli Nationale suffered a 1-0 defeat to the Super Eagles on Wednesday and are left with just one point from two matches.

Keita is, however, refusing to give up on the possibility of Guinea making it to the last 16 of the 2019 Africa Cup of Nations in Egypt despite their current situation.

“It wasn’t our day (Wednesday) but we did all we could and played to our level best.

“We have to keep our heads high and move to the next match with an aim to win. It is not yet over and we will fight till the end,” Keita summed up.

Guinea, who are now third in Group B following Madagascar's 1-0 victory over Burundi on Thursday, must defeat The Swallows in their last Group B game at the All Salam Stadium Cairo on Sunday, June 30 to stand a chance of reaching the knockout phase.

Nigeria and Madagascar will also clash on Sunday at the Alexandria Stadium in the other Matchday-3 Group B match. The two games will be played simultaneous 15:00 GMT.