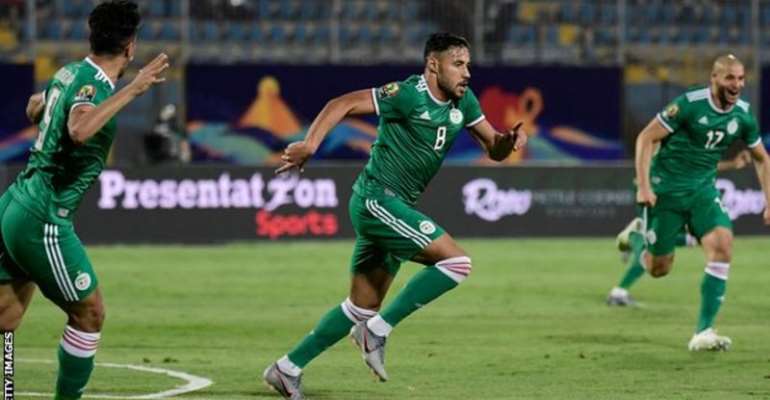 Algeria beat Senegal to clinch a place in the Africa Cup of Nations last 16.

The match was billed as a showdown between Algeria winger Riyad Mahrez, of Manchester City, and Senegal's Liverpool forward Sadio Mane - but both players had quiet games.

Youcef Belaili blasted home the only goal of the game from the edge of box from Sofiane Feghouli's cross.

Senegal almost equalised with the final action of the game, with Mane heading over from close range.

Africa's highest ranked team need to beat Kenya in their final group game to be guaranteed a place in the knockout stages.

Mane was unfortunate not to win a penalty when he was sandwiched by Adlene Guedioura and Ramy Bensebaini with 20 minutes to go. The video assistant referee system does not come in until the quarter-final stage.

The game did not live up to the hype, with Senegal not having a shot on target until the 78th minute when Youssouf Sabaly's 20-yard shot was parried by Rais M'Bolhi and Mbaye Diagne put the rebound wide from close range.

There was no action of note in the first half at the 30 June Stadium in Cairo, with former West Ham winger Feghouli curling wide moments before setting up the only goal.

Stoke City midfielder Badou Ndiaye blazed a shot over for Senegal just after the hour-mark and Mahrez, in a rare moment of magic, lashed an effort just wide from long range.

Group C's other teams, Kenya and Tanzania, meet at 21:00 BST in the same stadium as both sides look to pick up their first points of the tournament.