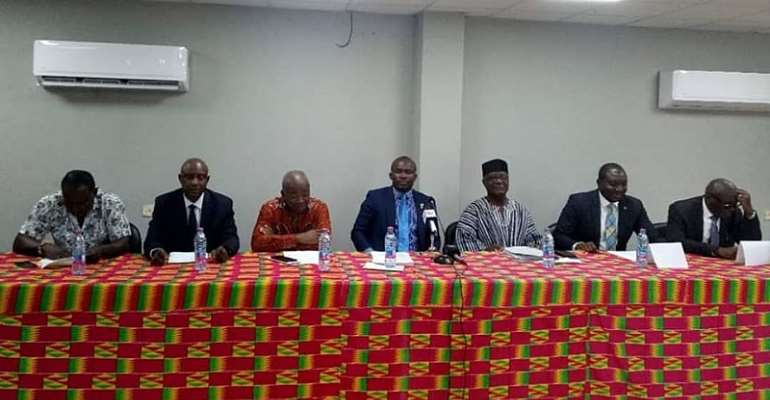 The International Games & Competitions Committee on Thursday held a meeting with the Press at the Media Centre of the Accra Sports Stadium.

The members of the Committee were introduced and they briefed the media on their activities and mandate.

Some of the members who spoke were Magnus Rex Danquah, Professor Peter Twumasi and Dr. Emmanuel Owusu Ansah.

Others present were the accountants of the Ministry of Youth & Sports and the National Sports Authority (NSA).

Magnus Rex Danquah, chairman of the Marketing, Sponsorship and Media Sub Committee appealed to the media to support them to attract sponsorship and educate the general public on Ghana Sports as the nation prepares to go to the next African Games in Morocco in August and as Ghana hosts the next Games in 2023.

He said the Games Committee is a living one and they are working to make progress, even to the Olympic Games 2024.

Prof. Peter Twumasi who is chairman of the International Games Committee told the press about their mandate and terms of reference.

He said they have put in place a ‘6 years Ghana Renaissance Plan’ to revamp Ghana Sports.

Dr. Emmanuel Owusu Ansah, technical advisor to the Minister of Youth & Sports who also heads the Technical Committee gave a background of the African Games and the performance of Ghanaian athletes which is falling drastically and called for recommendations and solutions.

He hinted that 17 disciplines have been selected out of the 22 to compete in the Rabat 2019 Games, but only the medal hopefuls would be picked to represent the nation.