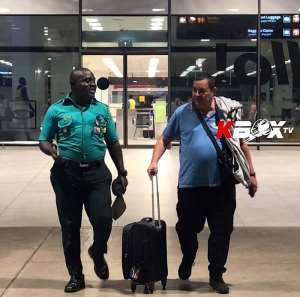 Referee Leslie Patrick Cross, the third person to be in the ring on Saturday to command and control affairs between Wasiru “GyataBi” Mohammed of Ghana and Loren Japhet of Tanzania for the WBO Global Super Bantamweight title has arrived in Accra.

He landed last (Wednesday) night around 23:30GMT and was escorted to Alisa Hotel where he will lodge ahead of Saturday’s fight.

Cross has been to Ghana to officiate before, as he was the referee who officiated the Emmanuel Tagoe vs Paulus Moses fight in October last year at the Bukom Boxing Arena.

He will this time be at the Sports Hall of the Accra Sports Stadium.

News reaching Yours Truly is that all is set with the arrival of Loren Japhet from Tanzania and the referee from South Africa.

Tickets for the international bout can be bought at Carmu inside circle Tiptoe Lane, JoyFM and the Accra Sports stadium gate at 20gh for Popular Stand, 50gh for Regular and 100gh for VIP.

There will be exciting undercards involving some rising stars who are itching to take Ghana Boxing to a higher level.

Some of Ghana’s budding musicians are also going to be in the ring to entertain fans.

The event is being promoted by E&J Boxing Promotions who have assured boxing fans of safety and adequate security.

K Box TV operated by Kofi B also partnering the show which would be shown on HSTV, the best Television network when it comes to boxing in Ghana.