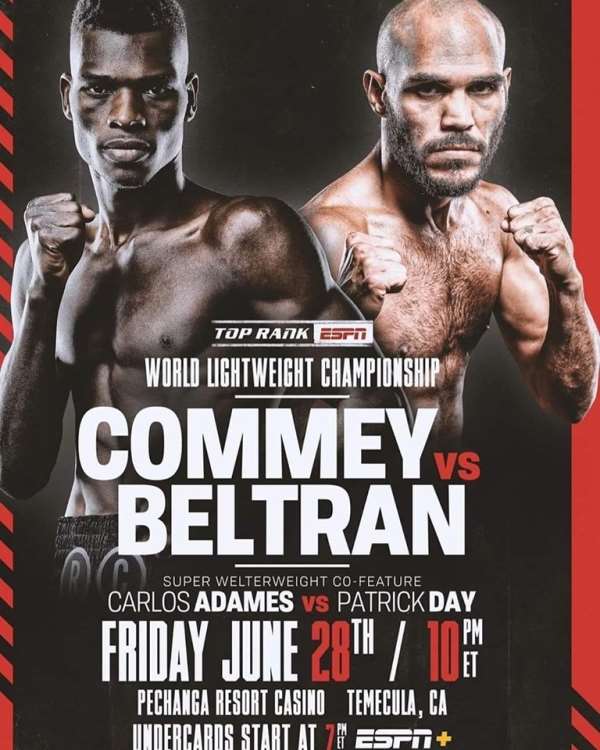 Ghana’s only world champion at the moment, Richard Commey is not letting any negative thing go into his system as he faces Ray Beltran in defence of his International Boxing Federation (IBF) World Lightweight title.

The fight comes off at the Pechanga Resort Casino in Temecula, California, USA, with Top Rank and ESPN partnering the promoters of the fight to reach viewers on TV.

In fact, this is a moment Richard Commey has been looking for in the United States to sell and establish himself as a credible and worthy champion to attract more fans and promotions.

Though he has prepared adequately, Commey is not underrating his opponent who is a former champion.

The IBF lightweight champion said “Ray Beltran is a strong fighter and I have nothing but respect for Ray. He’s had a great career but I am in the Richard Commey business and I am still improving thanks to Andre Rozier and the team in New York, and I will show off the improvements I’ve been making on June 28.

“Camp has gone perfectly for the fight, and I have to thank Andre and the team for that. We’ve worked as hard as ever and improvements are really starting to show and I feel I am taking the steps I need to to become an elite fighter.

The Sports Writers Association of Ghana (SWAG) Boxer of the Year 2018 is looking forward to a good victory, possibly by knock out and meet other ranked boxers.

His target is to unify the world lightweight belts and he is just gathering the momentum to beat the world best.

With his achievement as a world champion, Commey is already in contention for the 2019 SWAG Sports Personality of the Year and retaining his belt is the key to open the doors to bigger opportunities.

Friends of Boxing (FOB) and the SWAG have wished him victory and success in the first defence of the IBF title.