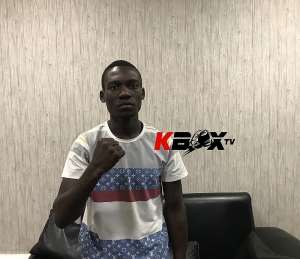 They were warmly welcomed by representatives of E&J Boxing Promotions, some boxing fans and media men.

The Tanzania boxer and his trainer will lodge at the Alisa hotel where he will continue his preparations towards Saturday’s show.

Japhet was full of confidence when he spoke to the media and said Ghanaians will chant his name when the bell rings for showtime.

Meanwhile, boxing fans are eager to watch the fight and see how Gyatabi will devour his opponent.

All roads will lead to the stadium at Osu where tickets for seats are selling fast at 20gh for popular stand, 50gh for regular and 100gh for the VIP.

Undefeated Wasiru Mohammed aka Gyatabi (10-0-0) has promised to roar and devour.

Weigh in and final Press Conference is at the Media Center of the Accra Sports Stadium of Friday.