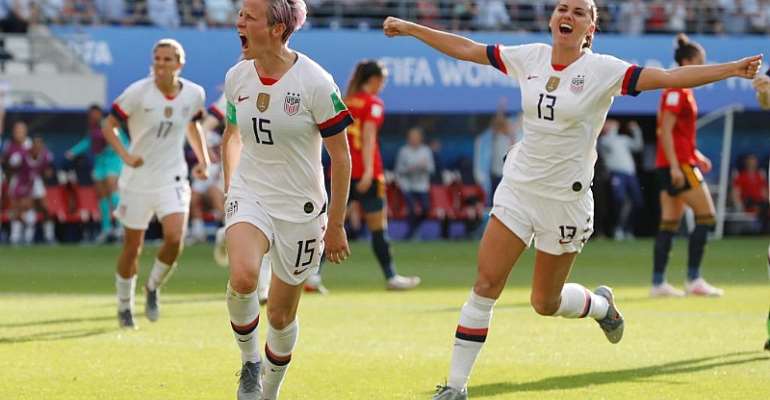 Megan Rapinoe scored two penalties as defending champions United States beat Spain to set up a mouthwatering quarter-final against hosts France at the women's World Cup, with Sweden joining them in the last eight.

On another day in the limelight for VAR, Sweden's goalkeeper Hedvig Lindahl made a brilliant second-half penalty save as her country edged out Canada 1-0 in Paris, meaning they advance to a similarly enticing tie against Germany.

The showdown between the holders and the hosts had seemed inevitable from the moment the draw was made back in December, but after France laboured to beat Brazil in extra time on Sunday, the USA did not find the going easy against Spain in Reims.

Rapinoe's first penalty gave Jill Ellis's team an early lead after Tobin Heath was brought down in the box by Maria Leon.

However, Jennifer Hermoso pounced to equalise moments later after Becky Sauerbrunn had been caught in possession, and Spain held their own after that against the World Cup favourites.

They were undone, though, by another penalty awarded for what looked a very slight touch on Rose Lavelle from Virginia Torrecilla.

The penalty was confirmed after a VAR check and Rapinoe smashed the ball into the same corner with 15 minutes left to give the USA the tightest of wins and line up the French.

"I hope it's wild and crazy and the fans are crazy and that there's tonnes of media around it and it's just a big spectacle," Rapinoe said of Friday's match.

"I think it's going to be incredible for the women's game. You have two heavy hitters meeting in the knockout rounds and this is everything you want."

It is not what Spain wanted, and the penalty that decided the game left a bitter taste in their mouths.

"I didn't touch her... they blew for that penalty because it was the United States," a distraught Torrecilla said.

'Pure joy'
In Paris, more than 38,000 fans saw Sweden edge out fifth-ranked Canada 1-0 at the Parc des Princes thanks to a solitary second-half goal scored by Stina Blackstenius, superbly set up by Kosovare Asllani.

Sweden then held on for the victory thanks to Lindahl, who dived to her right to keep out Janine Beckie's 69th-minute penalty awarded after a VAR review showed Asllani had stopped a Desiree Scott shot with her arm.

"I was so happy, just pure joy, and my teammates felt the same way," said Lindahl, when asked to describe her emotions after saving the spot-kick.

That was the 22nd penalty awarded at this World Cup, equalling the total tally from the 2015 tournament and underlining the influence of Video Assistant Referees, although VAR later intervened to overturn a spot-kick awarded to Sweden.

Heatwave grips France
Sweden will face Germany on Saturday in a repeat of the gold medal match at the 2016 Olympics, which the Germans won 2-1.

"I had the best preparation today that you could have for a match like that. I listened to four albums by Neil Young, who is Canada's top performer," said Sweden coach Peter Gerhardsson.

Asked what music he would listen to before facing Germany, Gerhardsson went for some industrial metal.

"It will be Rammstein. They released a new album and it will be heavy going on Saturday so that will work just fine."

On Tuesday the last two quarter-final places will be decided as Italy take on China in Montpellier before European champions the Netherlands meet 2011 World Cup winners Japan in Rennes.

The temperature could be a particular concern in the first of those matches as a heatwave grips much of France. In Paris on Monday night, the temperature remained close to 30 degrees Celsius (86 Fahrenheit) after the match kicked off at 9pm local time, and it is set to get hotter in the coming days.

FIFA said that "cooling breaks" may be needed during games to protect players from the effects of the heat.