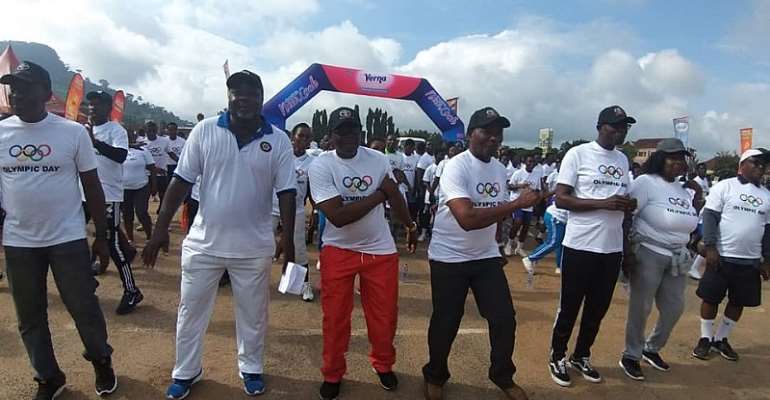 Mr. Isaac A. Duah, a board member of the Ghana Olympic Committee (GOC) and chairman of the planning committee for the 2019 Olympic Day activities has praised Toyota Ghana, Twellium Industries and Indomie for supporting this year’s event which took place in the capital of the Eastern Region.

Duah who is also president of the Ghana Tennis Federation (GTF) said the event was successful due to the support of the companies who provided their products to participants.

Toyota Ghana, an Olympic partner donated 500 tee shirts for the programme, while Twellium Industries gave out some of their products like Rush Energy Drink, Verna Water, Planet soft drinks and exercise books, pens and hand bands to the students.

Indomie also gave out their products and exercise books and mugs to other participants and guests.

Emmanuel Olla Williams, GOC Youth Coordinator praised the companies who showed up and supported the event.

He said government alone cannot fund sports in Ghana, so companies and individuals must help.

Ben Nunoo Mensah, president of the GOC who was very instrumental in securing the sponsorship commended the media for their role in promoting Olympism.

Richard Akpokavie, secretary general of the GOC advised the participants to appreciate the values of Olympism which are Excellence, Friendship and Respect.

Hon. Eric Kwakye Darfour, the Eastern regional minister and MP for Nkawkaw expressed that sports has many benefits and is an avenue for changing lives. He commended the organisers of the successful event and advised the students to take their studies and sports serious.

Madam Luana Solomon led the students in a Zumba and aerobics session, which was full of fan, fat burning and energy sapping.

The Olympic Day is set aside by the International Olympic Committee (IOC) to promote the spirit of Olympism, unity, peace and love.

Background
On 23 June 1894, delegates from 12 countries assembled at the Sorbonne in Paris and voted unanimously to support Pierre de Coubertin's proposal to revive the Olympic Games. This marked the birth date of the modern Olympic Movement and the founding of the International Olympic Committee (IOC).

In January 1948, at the 42nd IOC Session in St Moritz, the members adopted the project of a World Olympic Day. Presented at the previous Session in 1947 by IOC member Dr. Josef Gruss from Czechoslovakia, the proposal was for National Olympic Committees (NOC) to organise this event between 17 and 24 June to commemorate the founding of the modern Olympic Movement and promote the Olympic ideals in their countries.