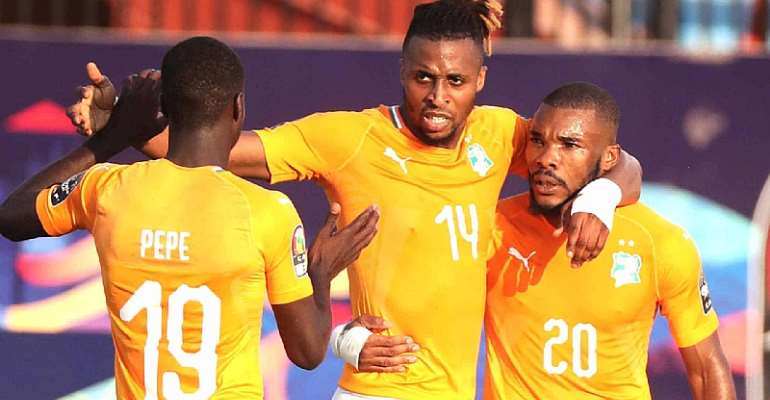 Ivory Coast secured a hard-fought 1-0 victory over South Africa in their maiden 2019 Africa Cup of Nations (Afcon) Group D match at the Al Salam Stadium in Egypt on Monday afternoon.

It is the Elephants' first-ever victory over Bafana Bafana, with the two former Afcon champions having met seven times.

The Elephants were the better side in the opening stages, but it was Bafana Bafana who threatened first through Thulani Hlatshwayo.

The South Africa captain connected with Kamohelo Mokotjo's cross which was well-saved by Sylvain Gbohouo in Ivory Coast's goal-posts in the 19th minute.

Ivory Coast were awarded a free-kick in a promising area following a period of sustained pressure.

Nicolas Pepe then stepped up and hit the crossbar with Ronwen Williams well-beaten in South Africa’s goal-posts just before the half-hour mark.

The momentum was with the Elephants and Jonathan Kodjia was sent through on goal in the 32nd minute, with the Bafana defence exposed.

However, Williams produced a great save to deny the Aston Villa player from a one-on-one situation as the shot-stopper kept the Ivorians at bay.

Ivory Coast and South Africa were locked at 0-0 at the interval.

Both teams launched attacks after the restart as they looked to open the scoring in the first 15 minutes of the second half, but they were struggling to create clear-cut chances.

The deadlock was broken in the 65th minute after the South Africa defence was exposed and they were punished by Kodjia.

The experienced marksman found himself in a one-on-one situation with Williams and he beat the SuperSport United player with a low shot to make it 1-0 to Ivory Coast.

South Africa had to find a way to penetrate the Ivory Coast defence and level matters in the remaining minutes of the game.

Attack-minded duo Sibusiso Vilakazi and Lars Veldwijk were both introduced by Bafana coach Stuart Baxter with time running out.

However, the Elephants did not sit back and defend their slender lead as they pushed forward, and they were awarded a free-kick in a promising area.

Pepe stepped up and unleashed a powerful shot which was brilliantly tipped over the crossbar by Williams in the last minute of the match.

South Africa then launched late attacks, but Ivory Coast stood firm at the back in the closing stages of the match and ultimately the Elephants secured a 1-0 victory over Bafana.