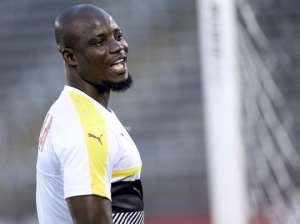 Black Stars coordinator, Stephen Appiah says the technical team will compel the playing body of the Black Stars to dig deep in their quest to win the Africa Cup of Nations (AFCON) in Egypt.

Ghana have failed to win the AFCON after 1982 when they reigned supreme in the competition, despite reaching the finals three times in between.

The former Juventus and Fenerbache ace who was the captain of the Back Stars team that won bronze in 2008 when Ghana hosted the rest of Africa has indicated that he will push the players harder to go that extra mile and bring back the AFCON glory after 37 years of trophy drought.

“I think that the system is the same. We don’t have to do anything different and we are trying to figure out why it is difficult for us to win the trophy, so that is our main focus now,” He told Pulse Ghana.

“I think that the players are there. Some of us, we are going to be hard on them, because I always say that some of us in our time, never had the chance to win the trophy.

“Me being a member of the technical team, I have the chance to win the trophy through the players who are going to play, so we are all praying,"

Ghana are the only African country to reach the semi-finals of every single AFCON since 2008, which is a record in the history of the competition for most consecutive semis, yet they have nothing to show for their impressive run in terms of silverware.

They will open their 2019 AFCON campaign on Tuesday against Benin at the Ismailia Stadium.

The Black Stars have been pooled in Group F alongside Benin, Guinea Bissau and champions Cameroon.