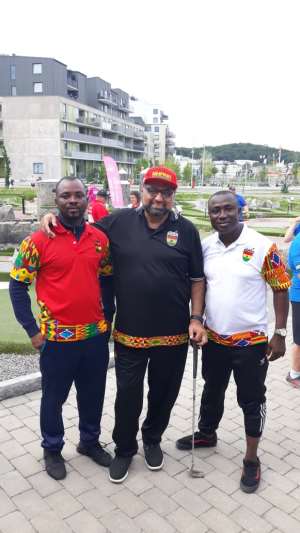 Ghana's Kelvin Boateng became the first African player to score below 30 at the World Adventure Minigolf Masters (WAGM) in Sweden as the three-day Championship ended on Sunday, June 16, 2019.

Although Team Ghana could not collectively pull itself on the leader board, the current African Minigolf champion made Ghana proud in the World Cup which featured over 90 players from 14 countries, with Ghana being the only African country to participate.

Kelvin endorsed his current status as 2018 Africa Minigolf champion with a total average score of 28 played over 7x18 hole matches in Sweden against the best Minigolfers in the World.

Meanwhile, Ghana's Solomon Addai had the most consistent play with an average total score of 32 over 7 rounds while Talal Fattal had a one-time high score of 27 in Round 4.

The three-day Championship which has been described as a highly competitive Minigolf play, saw host nation Sweden winning the ultimate while defending champions Germany managed the second spot.

Captain of Team Ghana and President of the Ghana Minigolf Federation, Mr Talal Fattal noted "The trip has been a learning curve on many fronts though most important lesson we realised is that Pre-world Cup training at the championship course should be not less than 6 days before the start of the 2020 world cup in Austria next year."

"We need to train more If we want to see African national Minigolf teams come up the World ranking & position themselves amongst the TOP 10 World Minigolf countries."

African Minigolf Federation, will this year host the 1st edition of the African Minigolf Cup of Nations (AMCON 2020) in Accra from September 27-29. It is expected to help improve upon Africa's performances for next World Cups.