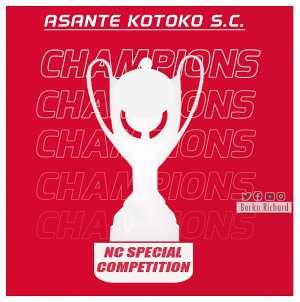 The competition which started a couple of months ago has finally been climaxed with two teams that have been outstanding right from the group phase, going head to head at the Baba Yara Sports Stadium.

A pulsating but entertaining first 45 minutes ended goalless with the two teams matching each other boot for boot.

Having resumed the second half, the two teams upped their game in search of the vital equalizer that will hand them the victory. Karela United drew first blood courtesy a good strike from winger Emmanuel Osei Baffour on the 50th minute.

Twenty four minutes later, the Porcupine Warriors were awarded a penalty kick after a player was fouled in the opposition’s 18-yard box. Danger man Abdul Fatawu Safiu stepped up and expertly converted the kick to restore parity for his side.

At the end of the 90 minutes, the two teams could not be separated and had to resort to penalties to determine who carries the day. Kotoko converted 4 of their kicks to beat Karela who only managed to score once.

The win means the Kumasi based side has qualified to represent Ghana in the next edition of the CAF Champions League per the regulations of the competition.