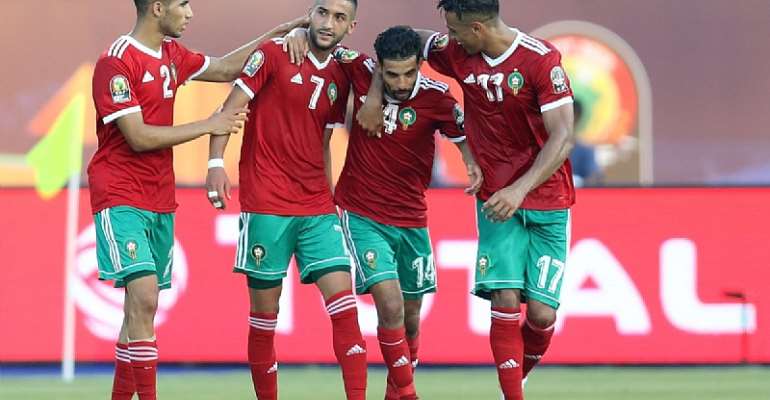 North African giants, Morocco has defeated Namibia 1-0 at the Al Salam Stadium to open their Group D campaign in the 2019 Africa Cup of Nations (AFCON) tournament.

The fixture which was played on Sunday afternoon showcased some good football on top of a well-organized Namibian side as far as defending is concerned. Though the Atlas Lions ended up winning the match as deserved, the Brave Warrior who lost can equally go into their next match with confidence, having made themselves proud in the group opener.

A first half of no goal from either side did not reflect the play of the teams, especially the Atlas Lions who piled pressure on their opponent for the most part of the game.

Herve Renard’s men returned from the break and continued to push for an equalizer that will hand them the maximum 3 points. Their zeal finally paid off on the 89th minute when Namibian defender Itamunua Keimuine scored an own goal.

With just a few minutes to end proceedings, the winners controlled the game to ensure they protected the lead. Referee Louis Hakizimana eventually whistled for the end of the match, confirming Morocco’s win on the afternoon.

The other Group D match between South Africa and Cote d’Ivoire will be played at the same venue tomorrow at 14:30GMT.

"I Took My COVID-19 To Some Registration Centres But I Was V...
14 minutes ago