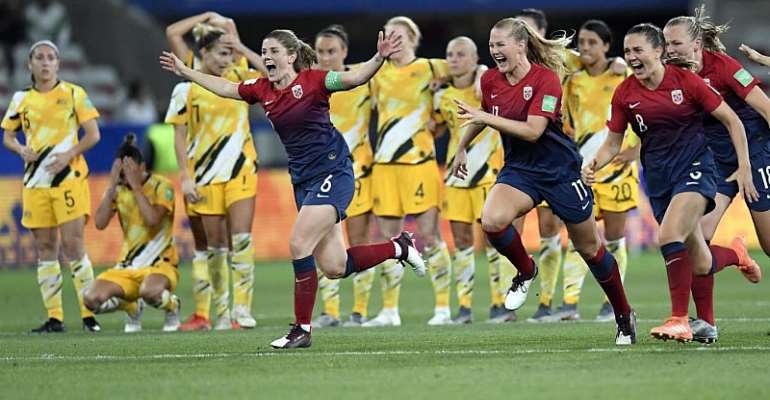 Germany eased into the quarterfinals of the Women's World Cup on Saturday while Sam Kerr was one of two Australians to miss from the spot as Norway dumped out the Matildas on penalties.

Norway won 4-1 in a shoot-out following a 1-1 draw in Nice in the last 16 late on Saturday, and the 1995 winners go through to a last-eight tie against England or Cameroon.

Those sides clash in the first of two matches on Sunday, just before hosts France take on the Brazil of Marta, the World Cup's all-time leading scorer.

France and England are among the tournament favourites and will both hope to avoid the fate of Australia, who had been eager to go far but could not get the better of a Norway side who have impressed despite being without their biggest star, Ballon d'Or winner Ada Hegerberg.

Norway had taken the lead through Isabell Herlovsen in the first half, but Ante Milicic's team forced extra time when Elise Kellond-Knight scored direct from a corner seven minutes from the end.

They survived when both Caroline Graham Hansen and Vilde Boe Risa hit the woodwork for the Norwegians, and the Matildas also had defender Alanna Kennedy sent off in the extra half-hour.

However, Kerr blazed over from Australia's first penalty in the shoot-out before Emily Gielnik's attempt was saved while Norway converted all of their efforts from 12 yards, with Ingrid Engen scoring the decisive one.

"I don't know if there are any words to describe how I'm feeling but, more importantly, how the girls are feeling," said dejected Australia coach Milicic.

Earlier, Germany captain Alexandra Popp hailed a "perfect day" for her and her team after the 2003 and 2007 World Cup winners eased to a 3-0 victory over Nigeria in Grenoble.

Popp, 28, marked her 100th cap by heading in a 20th-minute opener for Martina Voss-Tecklenburg's team.

Moments later, Lina Magull was caught on the knee inside the box by Nigerian left-back Evelyn Nwabuoku, and a penalty was given after a VAR review.

Sara Daebritz made no mistake from 12 yards, before Lea Schueller sealed the victory late on.

"It was a perfect day today. We put a lot of pressure on the Nigerians and the early goal gave us stability," Popp told broadcaster ZDF.

England wary of Cameroon
Germany will face either Sweden or Canada, who play on Monday, in the quarter-finals next weekend.

Meanwhile, England coach Phil Neville warned of the threat posed by Cameroon as the teams prepare to clash in Valenciennes in Sunday's first last-16 tie at 1530 GMT.

After emerging from their group with three wins out of three, England are heavy favourites to beat a Cameroon side ranked 46th in the world.

The Indomitable Lionesses made it through to the knockout phase with just three points by virtue of a 95th-minute goal to beat New Zealand and go into the tie with the pressure off.

"They've got dangerous players in the attacking third and they are a team that will go for the victory and that is not something we have really experienced so far at this World Cup," said Neville, describing Cameroon as a team who "will take risks and gamble."

That tie will be followed by France's clash with Brazil in Le Havre, with the pressure on the hosts to make it through to the last eight.

For French fans, the match-up evokes memories of the 1998 men's World Cup final, which Les Bleus won 3-0, but Brazil's women are not currently a leading force.

In addition, their two biggest stars, Marta and Formiga, are struggling for fitness, according to Brazil coach Vadao.

Marta has been battling injury throughout the competition and is not at "100 percent", while the 41-year-old Formiga has an ankle problem.

"We're going to see how she's doing in training and maybe we can count on her tomorrow night," Vadao said on Saturday.