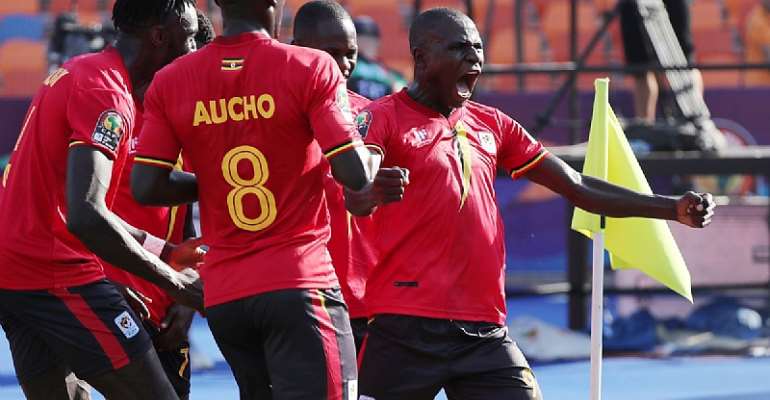 The Cranes of Uganda has defeated the Leopards of DR. Congo 2-0 in the ongoing Africa Cup of Nations (AFCON) tournament at the Cairo International Stadium to move to the top of Group A.

An overall impressive first-half performance from the victors finally paid off on the 14th minute when striker Patrick Kaddu jumped highest to head home a well-taken corner kick.

The Kampala Capital City Authority FC striker intelligently slipped away from his marker in the penalty area before flicking Farouk Miya’s inviting corner with a thumping header into the back of the net.

DR. Congo pushed for an equalizer to level the score and came close to doing so but for a good piece of goalkeeping from Denis Onyango on the 42nd minute to keep Uganda’s lead intact.

Having resumed from the first half break, Uganda continued their dominance as they pushed for another goal to cement their victory. Farouk Miya who had been exceptional on the afternoon produced another assist to drag the game away from their opponent.

This time around, it was Emmanuel Okwi who sent his header into the back of the net, completely beating the helpless Ley Matampi who was in goal for DR. Congo.

The win means Uganda has moved above Egypt on the Group A standings. They lead the host nation on goal difference despite having 3 points apiece.